The restoration of ancient Rome has become fashionable. 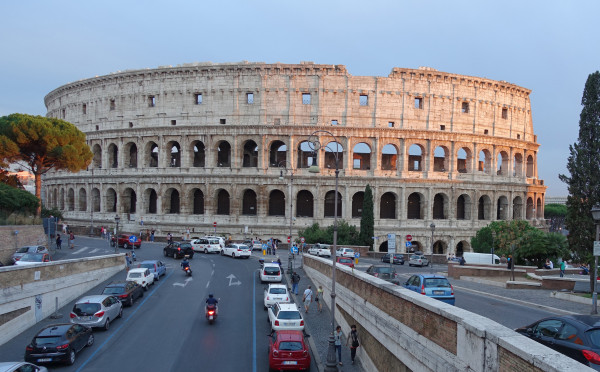 Last year (2015) the Coliseum completed it’s 25 million euro restoration thanks to Diego Della Valle and Tod’s Leather Goods. It hasn’t looked this good since 1349 when an earthquake caused the outer wall to collapse. 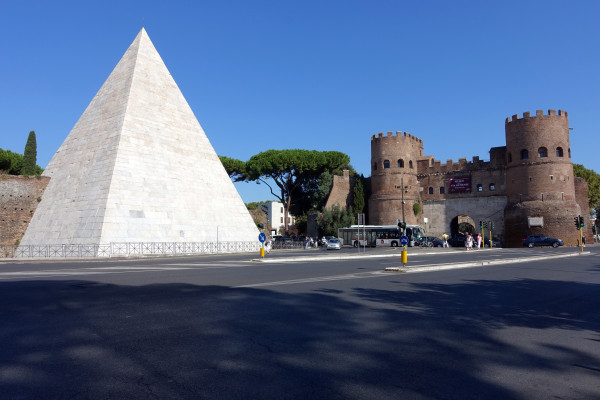 Thanks to a generous donation from the Yagi Tsusho company (Moncler), 2015 also celebrated the restoration of the 1st century Pyramid Mausoleum of Gaius Cestius, the Imperial Banquet Manager/Party Planner to the Emperor Augustus. 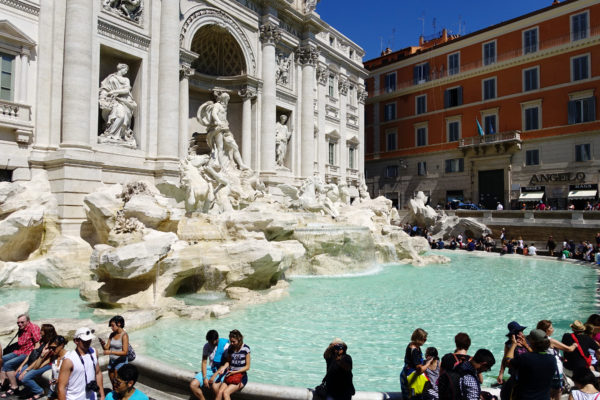 The Fendi fashion house gave 2 million to restore the Trevi Fountain. It re-opened this year (2016) and it is magnificent. The fountain stone hasn’t appeared this white since it was completed in 1762. 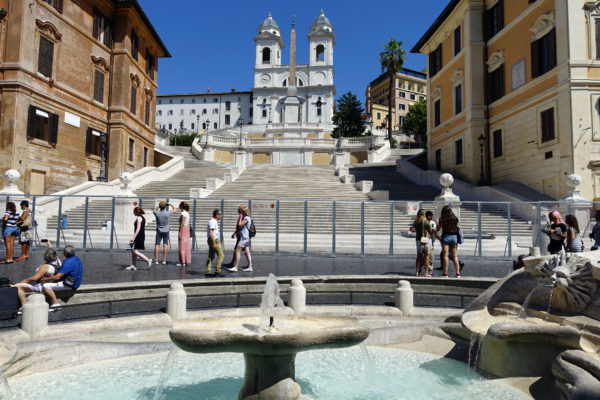 The Bulgari fashion house just restored the Spanish Steps. The grand staircase was scheduled to reopen in August 2016 but the date was pushed back to October. The cracks were repairs, the stone was cleaned and the famous Spanish Steps look new again. 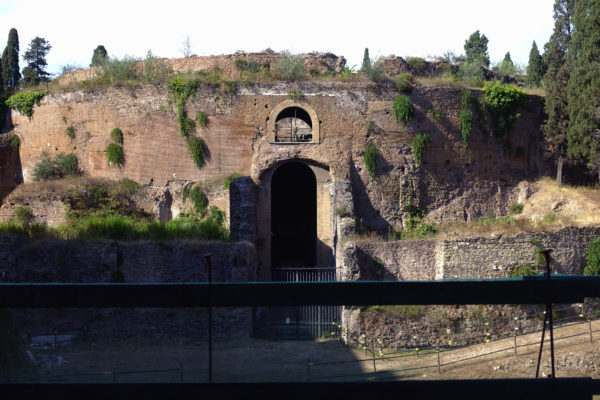 The Mausoleum of Augustus, the father of Imperial Rome has laid in ruin for centuries. Mussolini had plans to restore the Mausoleum as the centerpiece to his grand Piazza Augosto Imperatore but by 1942, Mussolini was on the run. Barely half of his Piazza was completed.

The Mausoleum became a shelter for cats and homeless. There have been many attempts to get money for the restoration of the great monument but the wheels of Italian government are slow and squeaky. Budgets always seem to go where they aren’t needed.

However, saving Italian patrimony seems to be fashionable these days and yes, there is finally a budget to restore the Mausoleum of Augustus. The first signs of awakening have appeared. The scaffold and wraps are down and the entrance to the 2100 year old tomb is back in view. 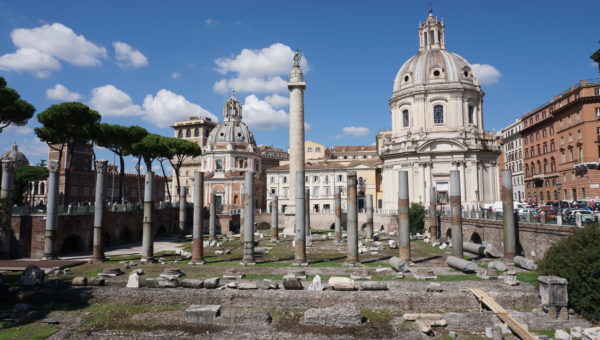 The Forum of Trajan is being restored. Columns of the Basilica of Ulpia (Trajan’s family name) are once again standing erect and there is a lot of activity rebuilding the largest of the 5 Imperial Fori along the via dei Fori Imperiali. 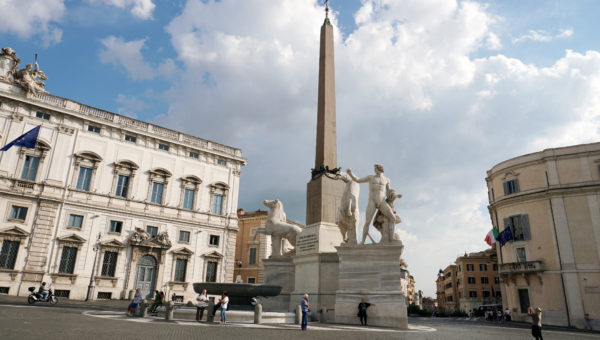 The Horse Tamers that stand on either side of the Obelisk in front of the Quirinale Palace got a facelift this year. They were placed here in 1786 by Pope Pius VI. The obelisk, a Roman copy, is from the Mausoleum of Augustus. The horse tamers are most likely Roman copies as well.

They are often referred to the Dioscuri, the twins Castor and Pollux, who fought on the side of the Roman citizens against Tarquinius Superbus, the last King of Rome, in the 509 BC battle of Lake Regillus. This was the victory that began the Roman Republic.

The horse tamers were discovered in the Baths of Constantine in 1527, pretty close to the same place they are today.

They just stood around till 1786 when Pope Pius VI put them on either side of the obelisk in the Piazza outside of the Papal summer palace, now the seat of the Italian President.

Pius VI was told they were the famous Dioscuri carved by the legendary 4th century BC Greek sculptors, Phidias and Praxiteles. He even gave the Greek sculptors credit for the works and carved their names beneath the statues as the sculptors. The legend was good enough to tempt the treasure stealing appetite of Napoleon in 1797 but alas, the Horse Tamers were too heavy to move. 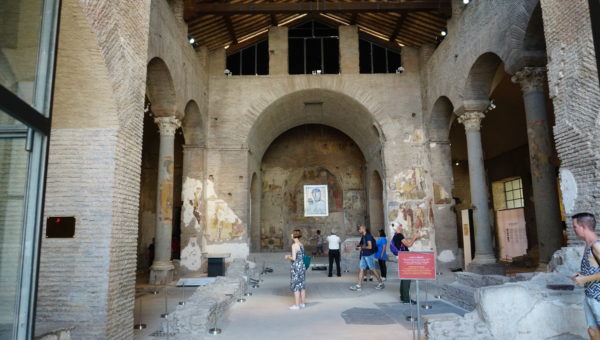 This year (2016) The Church Santa Maria Antiqua was open to the public for the first time since it was rediscovered 116 years ago. This is the oldest Church built in the ancient Roman Forum 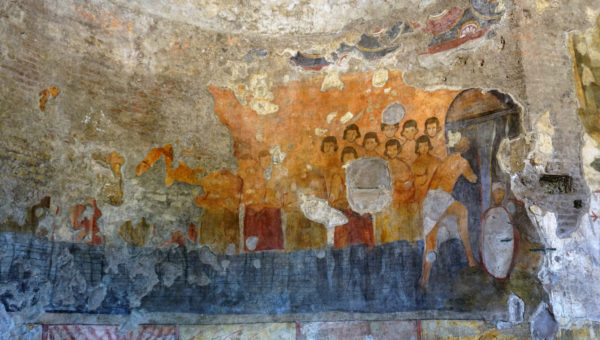 Santa Maria Antiqua goes back to the 1st century in the time of Tiberius when it was a temple dedicated to the deified Emperor Augustus.

The Temple was rededicated in the 6th century to the 40 Martyrs of Sebaste (modern day Sivas, Turkey), Roman soldiers from the XII Legion Fulminata who died from standing naked in freezing cold water for their conversion to Christianity.

The Imperial Ramp of the Emperor Domitian was also revealed. 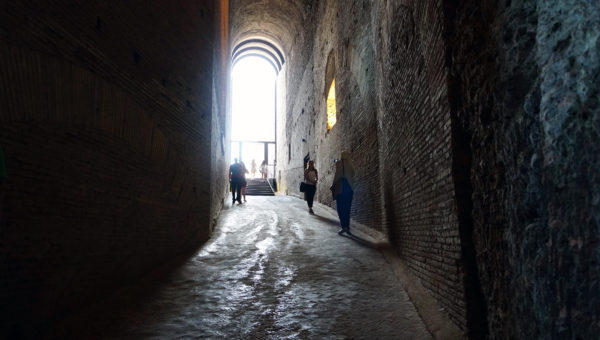 The fabled ramp built during the 1st century AD by the Emperor Domitian connected the Palace on the Palatine Hill to a secret door in the back of the Temple of the deified Augustus in the Forum.

I’ve read about the ramp but never really knew if it was real or not. It is.

The Imperial ramp transports you back to the 1st century. It is one of the most complete structures of the forum, even though much of it has been rebuilt. Half way up the ramp is a rest stop, a 2nd century latrine built during the time of the Emperor Hadrian.

The ramp is complete to the lower floors of the Palatine palace of Domitian. It did go up to the higher floors but that part no longer exists.

The exhibit is one of the best new offerings of the ancient Forum. It opened in April 2016 and closed on September 11th 2016. Hopefully, the success of the exhibit will allow it to re-open again soon.

It’s JUBILEE Time in Rome, a time for Pilgrims to visit the Holy Churches and relics of Rome. The Jubilee tradition goes back to 1300 and has occurred every 25 or 50 years every since. Actually, some Popes have called for Jubilee year whenever the coffers were bare. Pilgrims are a great source of income.

Jubilee means access to every church in Rome, many of them that have been closed every time we’ve tried to get in.

The big ticket is the “Holy Door” at Saint Peters. It’s sealed shut most of the time and then broken open (literally) during Jubilee years. The entrance through the door is free but the wait is long, very long.

If you’re interested in strange relics, Rome is a treasure trove.

I’ve written a bit about the relics of Rome but during this Jubilee year, we discovered another worthwhile visit.

The Church of San Giovanni dei Fiorentini sits in the Piazza del’Oro, at the corner of the via Giulia, close to the Ponte Principe Amadeo Savoia Aosta Bridge across the Tiber River.

Although this is a minor Basilica, and rarely open, it is a classic baroque church with all the great architects attached to it’s construction; Antonio da Sangallo the younger, Giacomo della Porta, Pietro da Cortona, Carlo Moderno and Francesco Borromini. Moderno and Borromini are buried in the church. 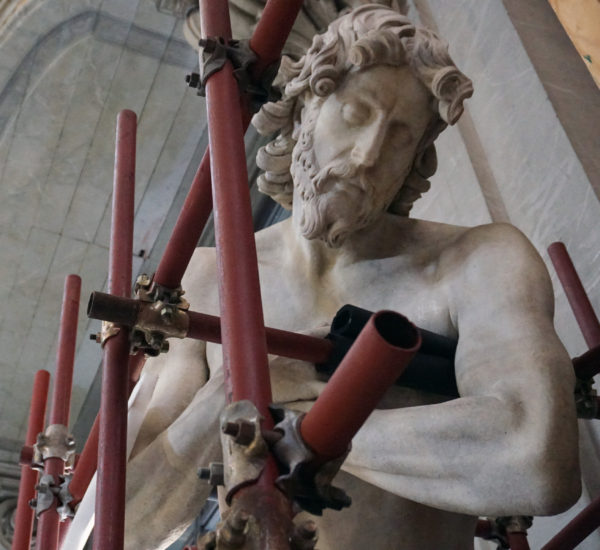 The church is in need of care. There are two grand statues by Francesco Mochi imprisoned in scaffolding towards the front of the church.

Mochi’s masterpiece of Saint Veronica is in the Saint Peter’s Basilica.

It is also one of the churches with one of the most unusual relics, the Holy left foot of Mary Magdalene. 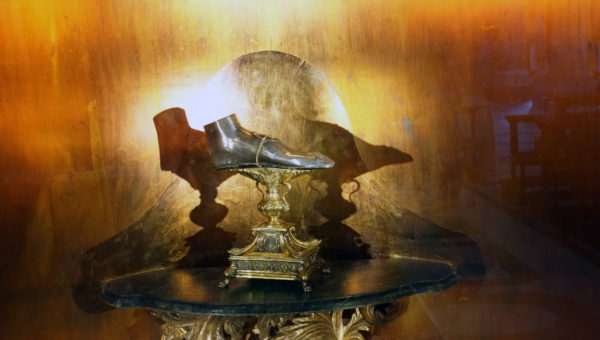 According to the legend, in 899, the Eastern Roman Emperor, Leo VI gave the order to move the body of Mary Magdalene from Ephesus to Constantinople. In 1204, the 4th Crusade sacked the city of Constantinople and placed Baldwin II on the Throne.

By 1238, Baldwin II was running low on cash and high on enemies. He went to Louis IX of France for help. In exchange for money and troops, Baldwin II gave King Louis the crown of thorns of Christ which ended up in the Sainte Chapelle in Paris and the body of Mary Magdelene which ended up in a sacred cave of Saint Baume in Provence.

The foot moved around from Saint Peter’s to a few other places until it found it’s way to the artist’s studio of Benvenuto Cellini, who made the reliquary.

All was well until 1599 when the Archpriest of San Celso ripped open the reliquary and removed the little toe. The silver foot was repaired in 1645 and eventually found it’s way to San Giovanni dei Fiorentini. 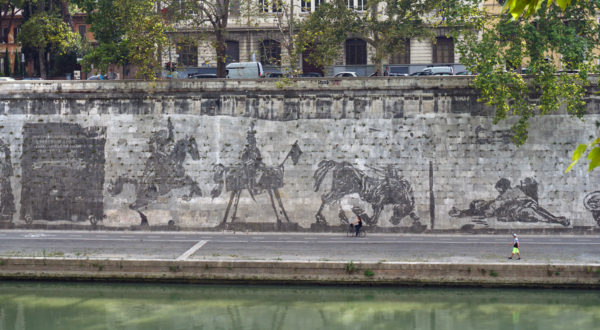 In 2016, the South African artist, William Kentridge created a mural along the Tiber River entitled “Triumph and Laments” .

It’s 500 meters long and 10 meters high. He achieved this great public art by removing the years of pollution on the wall to create the art.

Yes, the fresco was created by removing dirt instead of adding paint. 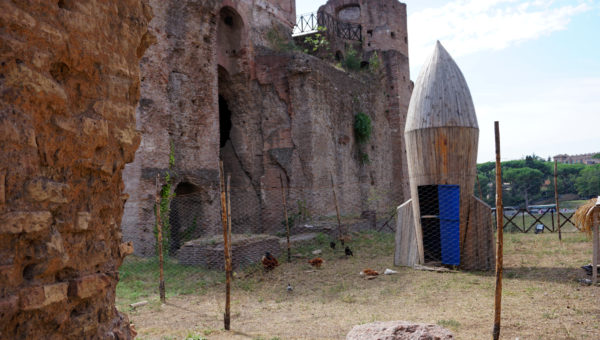 The Palatine hill was covered with strange art installations like this Chicken Spaceship outside of Domitian’s Palace. 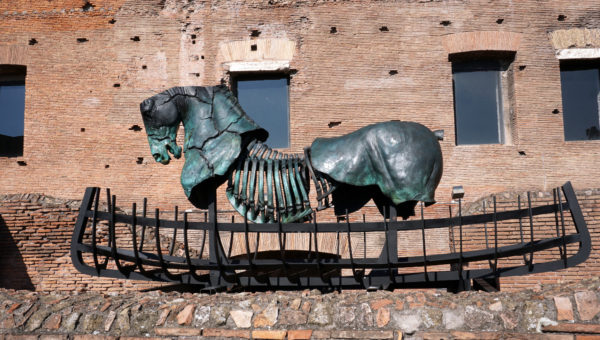 A touring exhibit by  Mexican artist, Gustavo Aceves has recently installed throughout Trajan’s Market and around the Coliseum and Arch of Constantine. The exhibit, called “Lapidarium”, is an ode to the plight of the refugee.

These bronze equine sculptures were fabricated in foundries of Pietrasanta, where Aceves has lived for many years.

The symbolism of the Boat of Charon to the Trojan horse tie ancient themes to our modern diaspora of refugees.

Italy has taken in more than 130,000 refugees in 2016. The plight of the refugee is a sad story and most countries of the world are trying to do the right thing although the resurgence of ultra-nationalist conservatism is tearing the fabric on unity in many western nations. We must always remember that all civilization has grown from refugees seeking a new life in a new country. 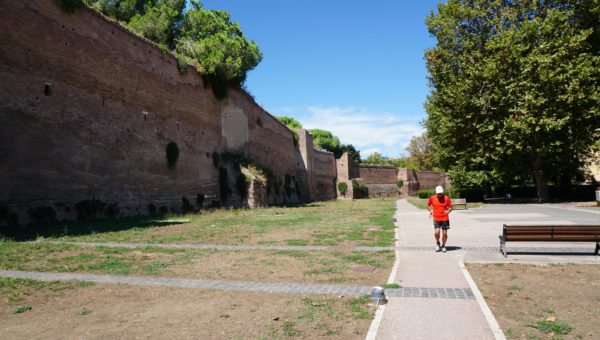 In ancient times, Romans sent Augurs to confirm the sanctity of a location. If a zone was occupied by a deity, it was forbidden to build upon or cross the land wearing armor. This is why soldiers were never allowed in the city wearing their weapons or armor. Of course a concealed knife was never noticed.

These sanctified places were called Pomerium. Walls took a turn to avoid them, villas were carefully constructed away from them. Some of them still exist.

The walk along the wall from Porta Metronia to Porta Latina is along a peaceful park filled with families and joggers. The park was once the ancient Pomerium. It is still forbidden to build structures or carry weapons in this Pomerium. 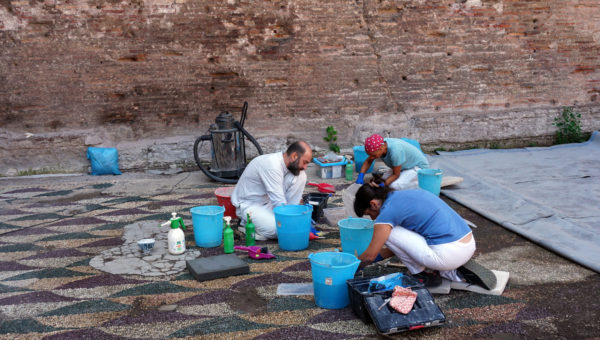 Restoration is ongoing. This year the ancient mosaic tiles are being brought back to life. Years of ground in dirt and pollution are being stripped away to reveal the original colors.

The baths closed in 537 after the Ostrogoths under Vitiges destroyed the aqueducts outside of Rome during the Gothic Wars of 535-554. These days, The Baths are the home of the Rome Opera Summer season and the backdrop could not be more spectacular.

A day in Rome is one smile after another. 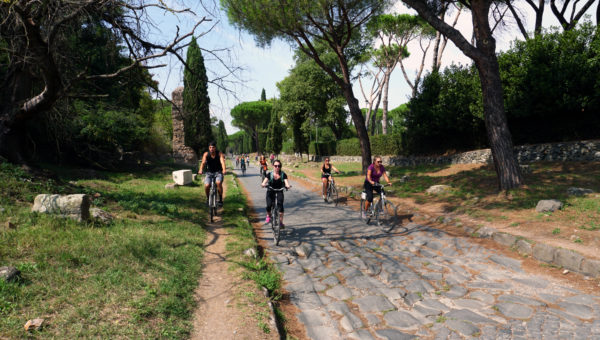 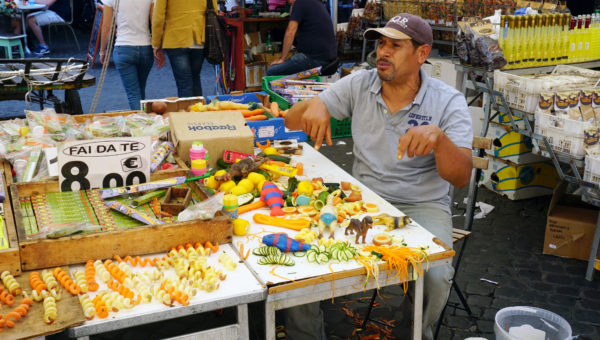 The market in Campo dei Fiore sells everything from fresh produce, to tee shirts the amazing all in one tool that slices, dices, twirls and swirls. It’s great entertainment. 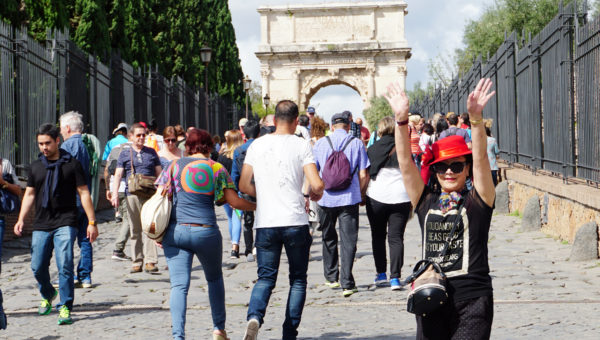 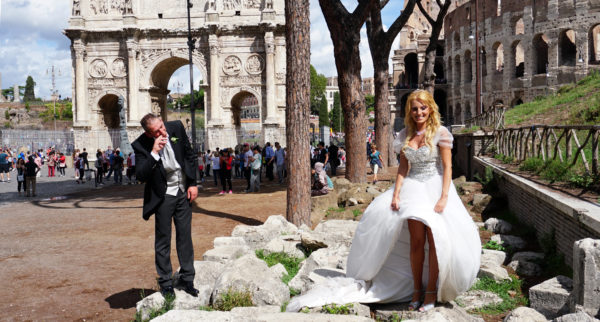 Weddings are a daily event and wedding photos in the company of the ancient monuments are obligatory. 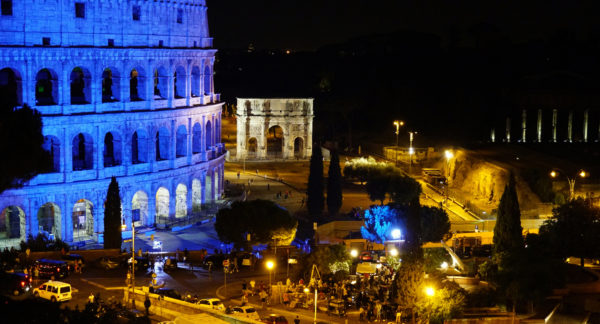 Movie shoots invade every neighborhood. Here they turned the Coliseum blue during an evening shoot. 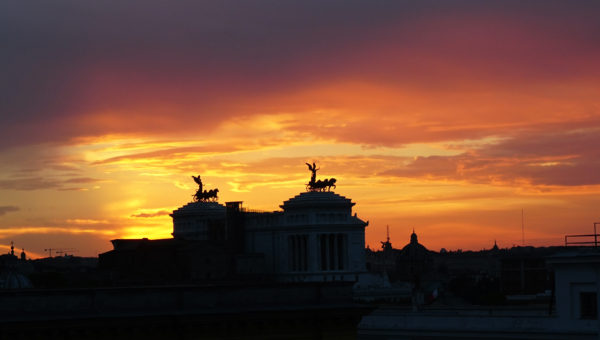