Aprilis (April) was originally the second month. The calendar (from the ancient Latin Kalendae), supposedly introduced by Romulus when he founded Rome in 753 BC, consisted of 10 months in a year of 304 days. The 61 days of winter were left out.

In the original Roman calendar, Martius was the 1st month of the year, named for Mars the god of war. It was the start of the Military campaigns after the long winter.

When Numa Pompilius succeeded Romulus in the early 700s BC, he added Januarius and Februarius. We still use the Roman names of the months.

When Julius Caesar was in Alexandria in 47 BC, he consulted a few expert astronomers who were able to calculate the actual solar year to be 365.25 days and the winter solstice at December 24th. Caesar proposed the calendar in 46 BC and it went into effect the following year in 45 BC. Julius Caesar also renamed his birth month, Quntillis (5th month) to Julius.

Not to be overshadowed by his uncle, Augustus renamed his birth month Sextillis (6th month) to Augustis and according to some scholars took a day from Februarius and added it to Augustis so that Julius wouldn’t have more days in it.

The calendar was updated in 1582 by Pope Gregory XIII. The Gregorian Calendar. Although all Catholic countries adopted the new calendar, the Eastern Christian church didn’t come around until 1926.

The 30 days of ancient Aprilis were filled with springtime festivals.

The Veneralia would happen on the 1st day of the month (the Kalends of Aprilis) in honor of Venus Verticordia (the changer of hearts) and love. In the cult of Venus Verticordia women and men would appeal to the goddess to aid them in affairs the heart, sex and marriage.

We now celebrate this day as April Fools Day.

There were 7 days of games in the Circus Maximus for festival of Cerealia, in honor of Ceres, goddess of wheat. Lit torches were tied to the tail of live foxes and released into the Circus Maximus. Ovid suggests the origin of this weird event originated from ancient Carleoli, where a farm boy caught a fox stealing chickens and tried to burn it alive. The fox escaped and ran all ablaze into the field of crops setting them on fire. Ever since the fox is punished as an offering to Ceres. Other explanations are purification of the field of vermin and disease.

Yes, Cereal is derived from Ceres.

On he 25th of Aprilis, the Robigalia, a festival to the dog god Robigus, would happen to protect the grain fields from disease by offering the god the blood and entrails of of an unweaned puppy. The fields were susceptible to wheat rust fungus which was known as Robigo.

In 204 BC, during the Second Punic war when Rome was seriously concerned about its defeat at the hands of Hannibal and the Carthaginians, they consulted the Sibylline oracle and determined if they welcomed the cult of Cybele they would be able to defeat Carthage. The cult of Cybele arrived to Rome on April 4, 204 BC. The Megalesia Festival (April 4-10), celebrated the goddess, Cybele, the Magna Mater, the Mother of All.

Around the ides of Aprilis (the 15th) the Fordicidia occurred, the festival dedicated to animal fertility that would commence with the sacrifice of a pregnant cow.

On the 21st of Aprilis, for the Parilia, shepherds would built a bond fire of straw, olive branches, laurel and sulfur and then, carrying their sheep, they would jump through the flame in a purification ritual. 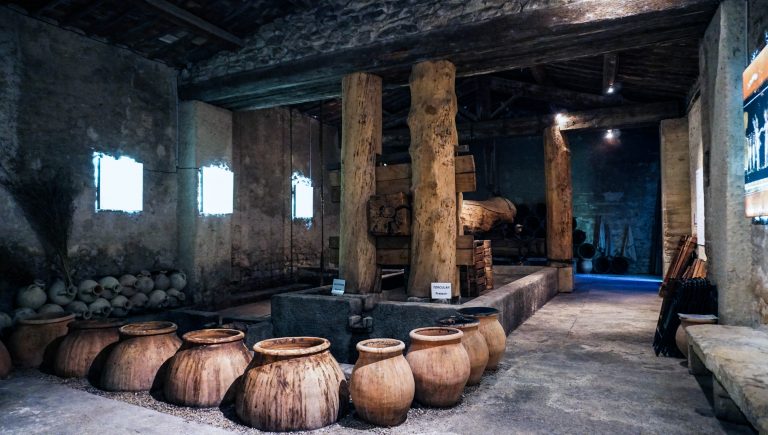 On Aprilis 23 there was the festival of wine (Vinalia Urbana), opening a cask from the harvest of the previous autumn and praying for good weather for the current years grape crop.

April 27 was the 6 day Floralia festival of the goddess, Flora. This was a more unconstrained and unprincipled festival that appealed to the debauched amorality of the ancient Romans. Prostitutes danced naked and participated mock gladiator fights.

Ovid writes that hares and goats, animals considered to be licentious in nature, were released into the crowd where the spectators would throw beans and flowering legumes (symbols of fertility) at them.

And just like Aprilis of ancient Rome, April in Rome today is just as packed with festivities.

The celebration of the Founding of Rome (Natale di Roma) took place on Aprilis 25. It still happens every 21st of April (since 1870). This year is the 2772nd birthday. On the 21st of April 2019 is Easter Sunday, the first day of Passover and the Birthday of Rome. It’s also a palindrome year.

The event is sponsored each year by the Gruppo Storico Romano, who also sponsor a Gladiator School in Rome throughout the year.

There are 4 days leading up to the grand parade down the via dei Fori Imperiali. Tents are set in the Circus Maximus showing clothing, medicine, food, explanations of religion, ointments and perfumes and items relating to waring and conquest and gladiatorial combat.

On the day before the Parade there are honors bestowed to various Roman citizens, in costume of course.

On the 21st, there is a parade. This year because of Easter Sunday, the parade was postponed till the 22nd. There were hundreds of Legions of Roman soldiers, Roman women dancing down the avenue, gladiators, dogs, senators and their wives.

April 7 – The Rome Marathon that begins at the Coliseum and goes through through all the ancient parts of the central historic city. It’s a tough run along the cobblestone streets but runners from all over the world come to Rome to compete. 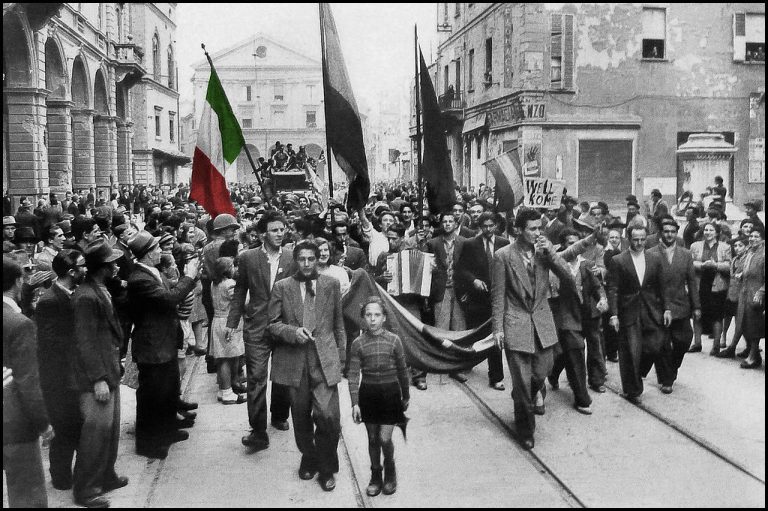 April 25th is the Festa della Liberazione, the commemoration of the liberation of Italy from Nazi rule. All museums and monuments are free entry on this day.

April 26 shows off 100 painters on the Via Margutta near the Spanish Steps. Via Margutta is where Federico Fellini and his wife the actress Giulietta Masina lived in the 1950s. The film “roman Holiday’ kicked the street into the public eye when the character of Joe Bradley (Gregory Peck) lived at #51 via Margutta. 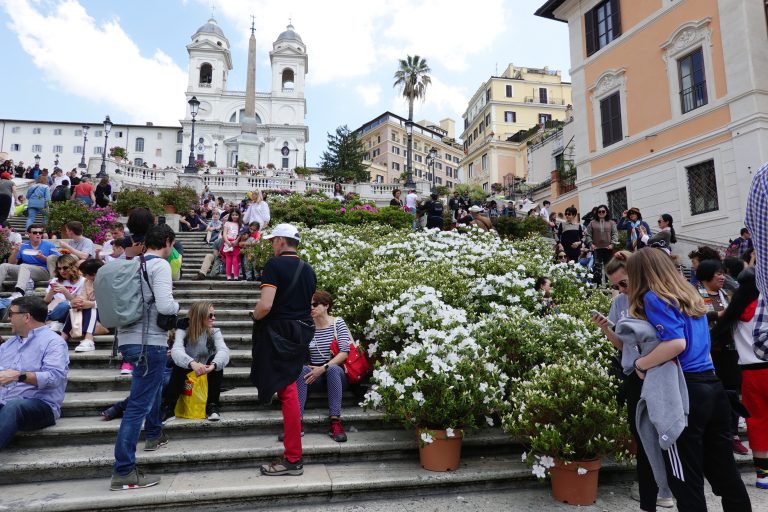 The Festa della Primavera shows off the azaleas on the Spanish Steps along with other music performances. Flower pots filled with azaleas line the center of the steps.

April in Rome is Easter (Pasqua) in Italy.

In the 5th century, the anglo-Saxon word for the month was Eostre-monath, a reference to the goddess Eostre. The festival of Eostre became the festival of Easter for all English speaking people.

Easter/Pasqua borrows many themes from the ancient Romans; rebirth and eggs. The egg was the symbol of fertility. A common architectural element (Greek and Roman) is the egg and dart, life and death. 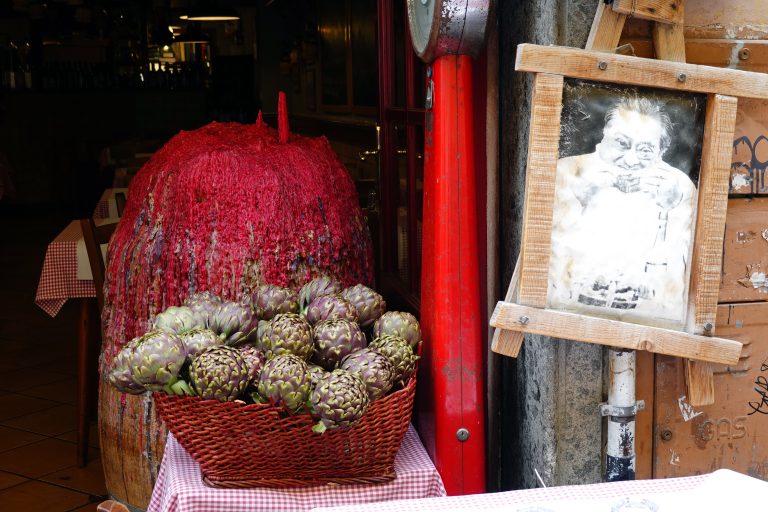 April is Carciofi (artichoke) time in Rome. In California we have the Artichoke festival in Castroville in June but in Rome it’s in April. The Artichoke is the State Vegetable of California.

In Italy, the Sagra del Carciofi festival is held every April in the Mediterranean coastal town of Ladispoli, about 35 kilometers west of the center of Rome.

Carciofi alla Giudia, once only found in the Jewish communities of Rome (Jewish Ghetto and the Trastevere), are now ovvunque (everywhere) in the city. Artichokes, along with eggplant and fennel were once considered Jewish food and snubbed by the Christian world until the 19th century.

The Jews came to Rome in 161 BC when Judah Maccabee sent an envoy to Rome to appeal to the Roman Senate for aid in their fight against the Seleucids. The Romans came and never left. It led to the siege of Jerusalem in 70 AD, a few days before Passover. This Roman victory still commemorated on the Arch of Titus in the Roman Forum.

After the First Jewish-Roman War, 97,000 Judeans were enslaved and brought back to Rome. many in the current Jewish population still trace their ancestry to the slaves.

April brings the celebration of Passover (Pasqua Ebraica) to the ±15,000 of the Jewish community of Rome. In 2019, Passover and Easter both fell on April 21st. It’s the year 5779 in the Jewish Calendar.