Along the via Julia Augusta (via Aurelia): 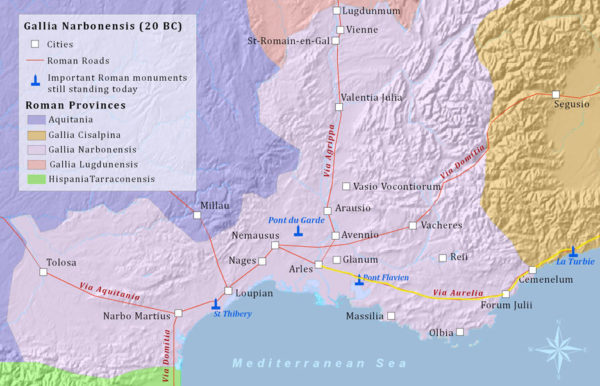 In 13 BC, the via Julia Augusta went east from Arelate (Arles) to Aix en Provence, Fréjus, Nice and into the Ligurian coast of the Italian peninsula where it merged with the via Amelia, via Postumia and via Aurelia back to Rome. By the 3rd century the name of the road had changed to the via Aurelia. The Emperor who changed the name was coincidently, Emperor Aurelian.

To find out more about Arles, the Barbegal Mill, Carpentras, Orange, Vaison La Romaine and Vienne, CLICK HERE for Provence along the via Agrippa.

The via Julia Augusta was inaugurated as part of the commemoration of the 13 BC defeat of 45 Celtic and Ligurian tribes by the Emperor Augustus. 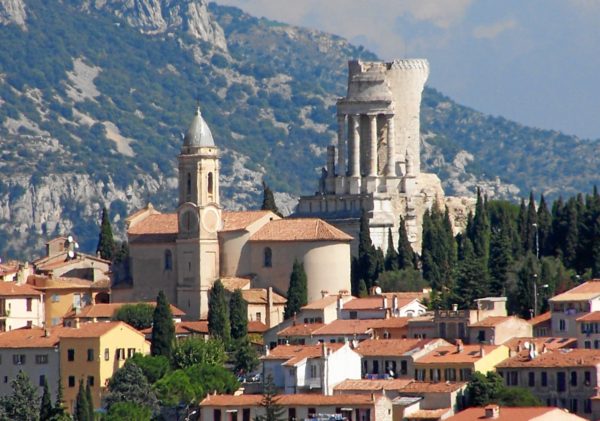 The road connected Arles to Rome through what is now the Ligurian coastline. In 7BC, in honor of the victory, the 164’ tall Tropaeum Alpium monument was constructed on a hill above the Mediterranean, along the Grand Corniche overlooking Monaco in what is now modern day La Turbie. La Turbie is also the place where Princess Grace of Monaco was killed in a car crash in 1982.

The triumphal monument was turned into a fortress, plundered for materials and desecrated well into the 20th century but part of it  it is still here.

In 2009, Joshua Hammer wrote this very good article about the via Aurelia for Smithsonian Magazine.

The story of the Roman Provincia in France starts in 125 BC, when the Greek port of Massilia (Marseille) was attacked by the Salyens, a confederation of northern Celtic tribes. Unable to defend themselves, they sent a plea for help to Rome, their favorite trading partner.

Help arrived in the form of Caius Sextius Calvinus and his legendary legions, known for lopping off the heads of the enemy and hanging them from the necks of their horses.

The battle was swift and short. In the end, Sextius Calvinus destroyed the Salyens mountain fortifications at Entremont and built his own camp nearby a group of thermal springs.

He called his settlement Aquae Sextius (the Baths of Sextius). It was the first Roman settlement in Gaul (France). Over the years it became known as Sextius and then shortened to Aix. it’s now known as Aix-en-Provence.

Calling Rome for help might have seemed like a good idea at the time but once you invite the Roman Empire into your house, the never leave. Instead of returning home, they colonized. From the encampment of Aquae Sextius they expanded and built their own port city, the Colonia Narbo Martius, modern day Narbonne.

Although Aix (Aquae Sextius) was the first Roman town of the Province, very little of it remains.

Excavations of the Celtic fortress of Entremont have been ongoing since the late 1800s when a few severed heads were found. In 1943, German troops using the hilltop fortress as a lookout encampment discovered some statuary, which they then sold to private collectors. Nonetheless, word got out about the site and after the war excavations began. The site is open to the public. 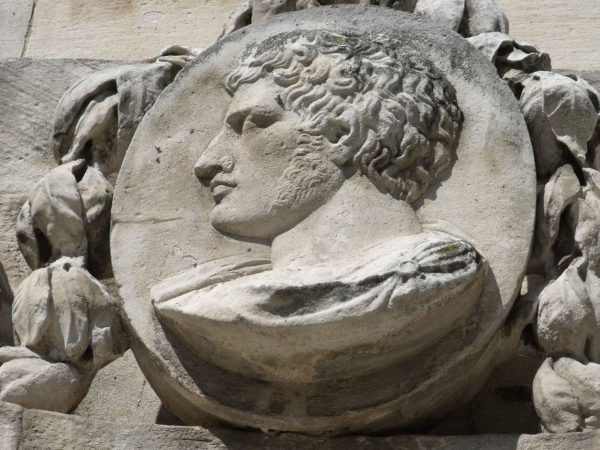 In the modern Provencal town of Aix en Provence is the bas relief carving of Caius Sextius Calvinus on the 1758 Obelisk fountain in the Place des Precheurs. 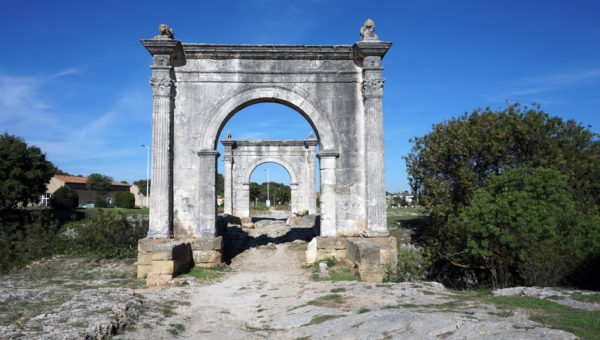 A great stop along the via Julia Augusta is the Triumphal Towers of the Pont Flavien, a small 1st century BC stone bridge crossing the Touloubre River near Saint-Chamas, about 20 minutes south of Salon de Provence and 40 minutes northwest of Marseille. This is the only double arch triumph bridge in existence.

The bridge was commissioned by Lucius Donnius Flavos, a Priest of Rome, as attested by the dedication still visible on the bridge tower. Although it was built in 12 BC, during the time of Augustus, many believe it was built to commemorate the victory of Julius Caesar over the legions of Pompey Magnus.

During the Great Civil War of 49-45 BC, Massilia gave its support to Pompey. When Caesar defeated Pompey, he also defeated Massilia, looting the city’s wealth and stripping it of all Roman support. Caesar took from Massilia and gave to Arelate (Arles).

The 20’ tall triumphal towers capped with stone lions were an imposing reminder to any who traveled from Arelate to Massilia, reminding them who was the victorious and who was the defeated. The road and the bridge were used a lot. You can still see the worn grooves of cart wheels in the stones crossing the bridge. The tracks are 1.42 meters [4.5 Roman feet] apart, the standard width of a Roman chariot axle.
The western arch has collapsed  twice. The first collapse was repaired in 1763 by Jean Chastel, who also rebuilt the lions. The only original lion is on the right hand side of the eastern arch. The second collapse is when a German tank collided into the arch. An American truck hit it in 1945. It was rebuilt in 1949 and if you didn’t know, you’d never notice.

Forum Julii was the fortress seaport of Julius Caesar. At that time the harbor of Forum Julii formed a natural lagoon to the Mediterranean. It served Rome as a Naval Port until the 5th century. As the sea receded over the years, the lagoon filled in with silt.

The colony was given to Rome’s 8th Legion. Gnaeus Julius Agricola, the General who conquered Britain, was born here in 40 AD. His named is honored these days with a parking lot on Place Agricola.

Supposedly when Augustus arrived to Forum Julii in 23 BC, Mark Anthony’s defeated fleet from the 31 BC Battle of Actium was moored here, ready to welcome the new Emperor.

During the Pax Romana, a large part of the navy moved away from Forum Julii and joined other fleets in Misenum, near Naples, but there were still enough of a fleet to handle any uprisings, notably during the civil wars after the death of Emperor Nero. 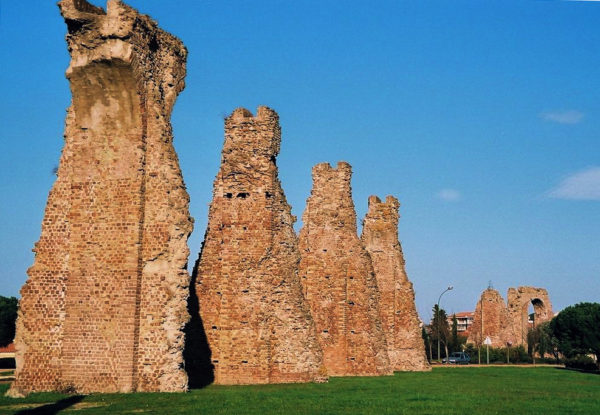 The Frejus aqueduct was another great architectural achievement spanning over 42 kilometers over hills and through solid rock. It flowed water to Forum Julii until the 5th century. The remains are stripped down red stone, standing like giant chess pieces.

Modern Frejus has tried to make a link to the past. In many ways it can be very confusing. The Theatre Le Forum is not the Roman theater and the ancient Forum. It is a modern multipurpose arts theater. The Roman Theater is a totally rebuilt theater on the site that once held the ancient version. 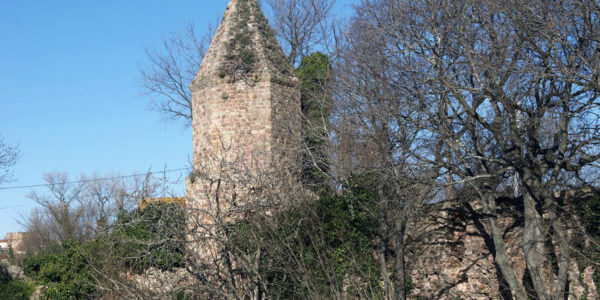 Although the harbor is barely visible, thanks to a 19th century restoration, the 33′ tall, 1st century Lantern d’Auguste still stands in the same position as a landmark of the entrance to the once fortified harbor. The only difference is that the stone column with the 6 sides pyramid cap now sits on land. 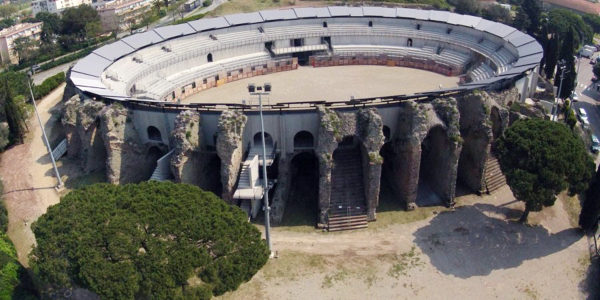 The grand piece of history here is the Frejus Arena that once held 10,000 people. The remains of some of the vaults have survived the ages but the interior is all rebuilt during a restoration project of 2008-2012. The amphitheater has endured a sad history of neglect and natural disaster. A flood of 1959 carried away most of the interior and filled the Arena with silt.

These days the Frejus Amphitheater hosts a concert series during the summer months.

Nice is one of the most beautiful small cities in Europe. It gets over 4 million visitors a year.

Nice was originally settle as the Greek port, Nikaia, named after the Greek god Nike. The Greeks still refer to it as Nikaia.

After the victory of Augustus against the Ligurians and the other 45 tribes, settlements and colonies began springing up along what is now the Côte d’Azur.

In 14 BC, the Romans built the colony of Cemenelum overlooking the Greek colony of Nikaia. 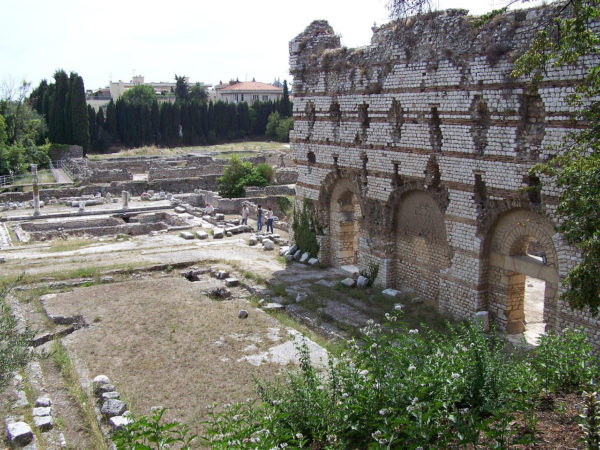 Cemenelum peaked in the 3rd century under the Severan dynasty. All 3 bath complexes were built them. Caracalla also improved the Amphitheater.

The ancient baths and amphitheater are still perched upon the hills of Nice’s Cimiéz neighborhood. The baths closed down in the 5th century.

The ancient site was a wonderful backdrop for the annual Grand Parade du Jazz, the International Nice Jazz Festival but the Cimiéz is a very upscale residential neighborhood and the tourist traffic became an annoyance. The Festival moved into the central city in 2011.

Of the 4 million tourists who come to Nice every year, very few of them go up to the Cimiéz to visit the Roman ruins. This might be good for the residents of the Cimiéz but if you happen to be in Nice, take the time and see them. It is an easy 30 minute walk from the lower city or easily accessible by municipal bus.

To find out other sites in the Alpes Martitimes along the via Julia Augusta I highly recommend the book ‘The Roman Remains of Southern France’ by James Bromwich. The book is out of print but there are still copies available.

Another great resource is The Roman Provence Guide by Edwin Mullins. Much of the information used in this article was provided in these two books.

The Provincia of Rome was looted, destroyed, repurposed and thankfully put back together thanks to Prosper Mérimée when he was the Chief Inspector of Historic Monuments in the mid 19th century.

Mérimée is most noted as the author of the novella Carmen that became the Bizet’s Opera of the same name, however, he did a lot more than giving the world the story of the gypsy Carmen. Mérimée saved the UNESCO city of Carcassonne from destruction and saved so many of the Roman antiquities in France.