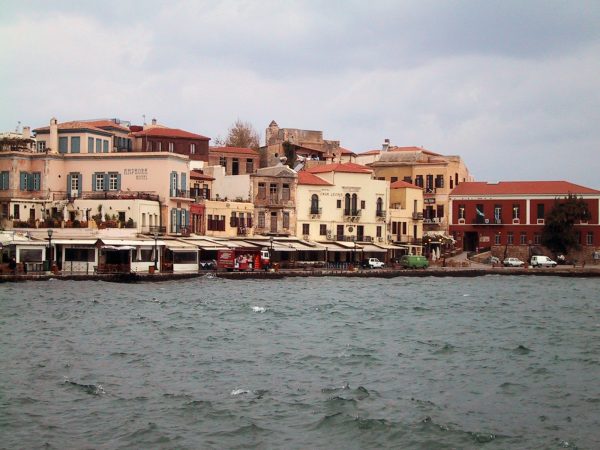 This is the home of Zorba the Greek, birthplace of Nikos Kazantzakis. It’s by far the largest of the Greek islands. It’s the home of the Minotian civilization, a 15th century Venetian stronghold, beautiful beaches and some really beautifulvillages.

There are three main cities on Crete. The capital, Heraklion is the largest and close to the airport. Chania and Rethymno are considerably smaller. We chose Chania for our destination, mostly because our dear Uncle Les lived there for many years.

We got off the plane at Nikos Kazantzakis airport and rented a car at the airport terminal (a rather bus-like thing called an Atos) and drove ourselves out to Chania.

We’re getting awfully good at Greek road-signs. Crete is a pretty big island an by the time we navigated the one way street of Chania, it took a little over 2 hours to arrive to the hotel, the Casa Delfino on Theophalo Street. 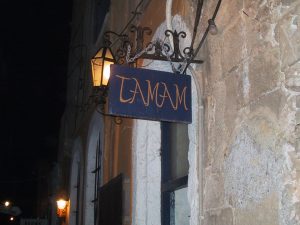 Chania is a small, sleepy city of about 55,000 people. The streets are narrow, the coffee is strong and the greek yogurt is so good. I can’t think of a better way to clog my arteries.

We discovered the restaurant Tamam and dined there almost every night we were in Crete. We tried our best to get the bill up to $20 for the both of us, but the highest we got was $17, and that was after pigging out on greek salad, meatballs, chicken in aubergine puree and baby lamb in yogurt-tomato sauce and a dessert of halvas (yum) and after-dinner raki (yuk). 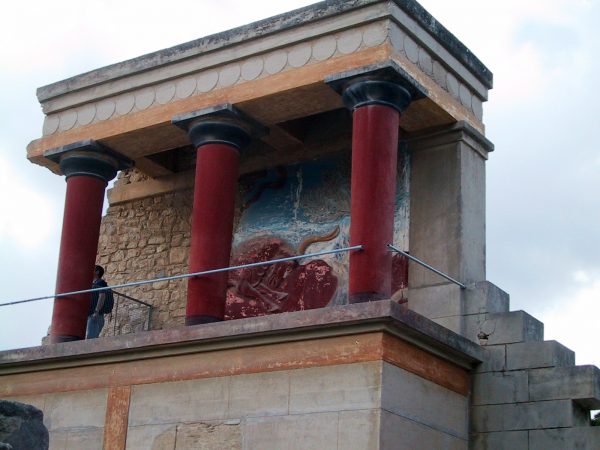 The Palace of Knossos is about a two hour drive from Chania. We attached ourselves to a tour group led by a small greek woman with a very loud voice who called herself Little Chris. Her (very expressive) tour was based on the fanciful re-creation of the Palace through the eyes of Arthur Evans, the British historian who bought the land and then rediscovered (and reassembled) the site in 1900.

According to Little Chris (and Arthur Evans) the west side of the Palace was reserved for religious purposes and the right side for royal living.  The color and detail of the wall frescoes are still evident and the Knossos symbols of the bulls horns and the double-head axe are everywhere.

The Minoans of Knossos could have easily been the inhabitants of Atlantis. The had water pipes long before the Greeks or Romans, sewers too; the Queen actually had a flushing (indoor) toilet. And remember, this was over 3,000 years ago. There was a massive wine press that served the entire population. They invented window shades made of stretched Papyrus soaked in olive oil, giving them a translucent quality. The royal women bathed in milk to keep their skin soft. There was a laundry close to the river and warehouses filled with clay pots of grain and oil. 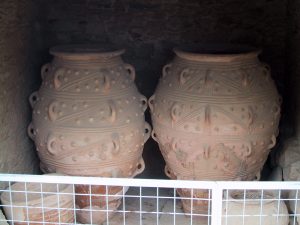 The jars of oil proved to be the downfall. There were two major fires.Large urns of oil and fire are a bad combination, espeically when the Palace is made mostly of wood. The Minotians rebuilt Knossos after the first big fire but the second one was too devastaing.

The Palace has over 1,000 interlocking rooms, which was Chris’s explanation for the labyrinth myth of Theseus and the Minotaur. The word Labyrinth also comes from the Greek word Labrys, or double sided axe, which was the symbol of the ancient Minoan city.

Most of the very valuable treasures of Knossos were carted off to the archeology museum in Heraklion, and so that’s where we headed next.  It’s a good gaze at some fertility figures, the famous snake goddess, bronze statuary, weapons, gigantic ceremonial double-headed axes, a fine boar-tusk helmet and of course all the wall frescoes, somewhat worse for all wear. 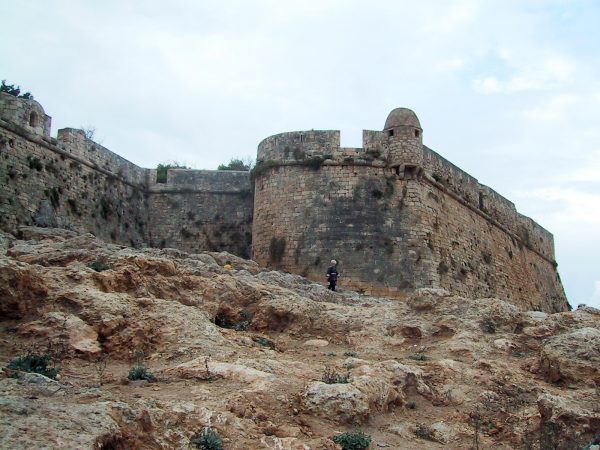 We’re back in the car, driving to the Rethymnon Fort. Herds of goats are blocking the roads but we finally get through only to find the Fort is closed on Mondays. And so we have a visit to this beautiful 16th century Venetian harbor town. 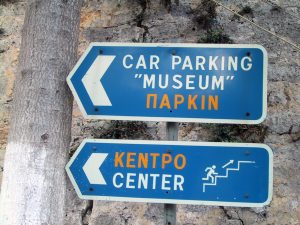 It’s been raining a lot but we don’t care. We’ll have a coffee.

We’re getting rather good at reading Greek letters, at least we now recognize words like NAPKIN (parking), XTOPODI (octopus salad)  and FARMEKEO (drugstore).  We’re graduating from infancy to toddlers.

We have one last walk around Chania and say our goodbyes to the staff at the Casa Delfino. And then, one more time we take the Atos for the 2.5 hour drive to Heraklion. It’s off to Rhodes..