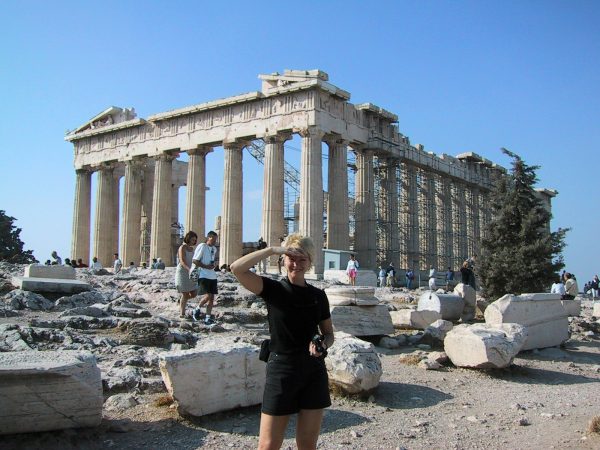 United Airlines sleeper suites, yahoo!  You never know if they’ll have them. You don’t find out till you arrive to the airport. A good sleep; a peek at the Northern lights; a brief layover at the Frankfurt airport and a retail experience to buy a small screwdriver to fix my glasses. I’m ready to go to Athens.

We grabbed a cab and soon we were passing by the National Park and the beautiful Acropolis Hill. It looks much better in person. Our room at the Athens Palace Hotel, wasn’t ready for us yet. There was an American wedding and the guests were late checking out (typical inconsiderate Americans).  Not a problem though. Who cares about a hotel when you have a city like Athens out the door. And so, we walked through Syntagma Square and into the Plaka, an old neighborhood under the watchful gaze of the gods on the Acropolis Hill. Once upon a time the Plaka residents created offering to the gods, these days the offerings are more geared to tourist, ranging from jewelry to postcards, painted wooden plaques, folk art, t-shirts, deep sea sponges and lots of restaurants. I know the Plaka is a big tourist hang, but considering we’ve never been to Greece before, it was just fine. Greek salads and souvlaki, her we come.

We were warned about the beggars and pickpockets, but the only beggars we saw were the cats. And there were a lot of them.

Walked up to the Acropolis.  The Parthenon; elegant, serene and naked looks beautiful even without all its decoration (which is currently in the British Museum, courtesy of Lord Elgin).

We attached ourselves to a English-speaking tour and learned the 4 to 9 architectural mystery of elegant proportions, that is to say if the height is 4, the legnth is 9. By the way, the width is 6. Most Greek architecture of this period is built according to this proportional equation. So let’s say the height is 20′ (4×5), then the legnth would be 45′ (9×5) and the width would be 30′ (6 x5). But this equation was based on more than principles of architecture. The ancient Greek saw a lot of power in numbers. The gods were also given numbers; Poseidon was number 9, Athena, as the patron of Athens, was number 4, and Athena ‘the Mother’ (of all Athenians) was the number 6. Mathematics has been a powerful force for a long time.

In 1806, Thomas Bruce, the 7th Earl of Elgin got permission from the Ottoman empire to remove as much as he could. He later gave (or sold) these pieces to the British Museum. The Greeks have been trying to get them back for a long time, but so far, no luck. 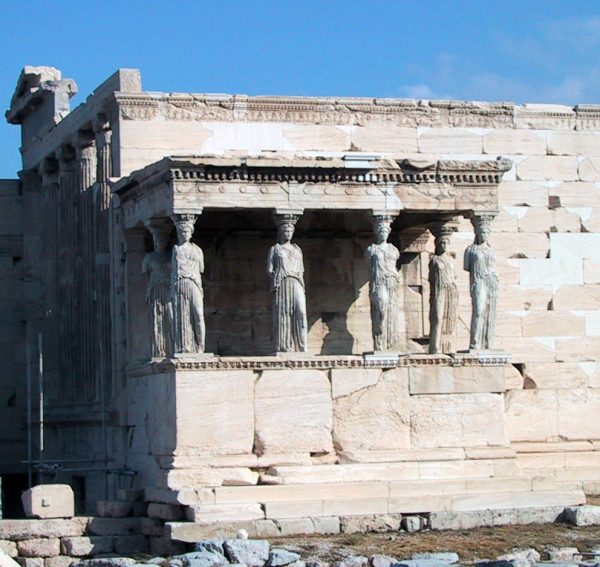 The Acropolis Hill is much more than the Parthenon. Another great building is the Erechtheum, with it’s female caryatids holding up the roof of the portico. The temple was dedicated to Athena and Poseidon Erechtheus.

Supposedly the Cercrops, a sacred half snake-half man creature believed to be the first king of Athens, lived inside of the temple and was fed honey-cakes by the Priestesses. If the snake-guy refused the cake, it was usually a bad sign.

The Caryatids came from Karyae, a town in southern Greece. They were women who carried baskets on their heads as they danced to the glory of Artemis. It was such a powerful image that their likeness became a very popular architectural design. The caryatid statues holding up the roof of the Erechtheum are copies. Five of the original six are housed in glass cases inside the small Archeological museum near the Parthenon. Lord Elgin took the 6th one to decorate his Scottish mansion, but it eventually moved to the British Museum to join the plundered “Elgin marbles”.

Inside the Erechtheum are the remains of the salt water well struck by the the trident of Poseidon and the olive tree planted by Athena.

We’ve had some grea expiriences with the cab drivers of Athens. They’re all pretty unique. This time we got a ride with Yorgas, a rock guitarist in a Memphis style (Memphis Tennessee that is) Blues band. He looked the part but we never got to hear any of the music.

In 1940, the Italian/German forces wanted to set up bases in Greece. On October 28, 1940, General Ioannis Metaxas’ response was “Ochi!” (No in Greek). It was this defiant “NO” that put Greece into the War on the Allied side. The commenoration of Ochi Day is now a National Holiday with all the trappings; closing of government offices and “the big Parade” which just happened to roll north of Syntagma Square, near our hotel. I love parades but after watching a couple of hours of almost every school band in Greece, we called it a day.

We took the took the subway over to the National Archeology Museum, the best Archeology Museum we’ve seen in a quite a while. The subway system is new and the city is adding new stops as quickly as possible, Unfortunately (or fortunately, depending on how you look at it) with every new dig, new artifacts are revealed. and new artifacts mean all work is suspended until the archeologists are finished. 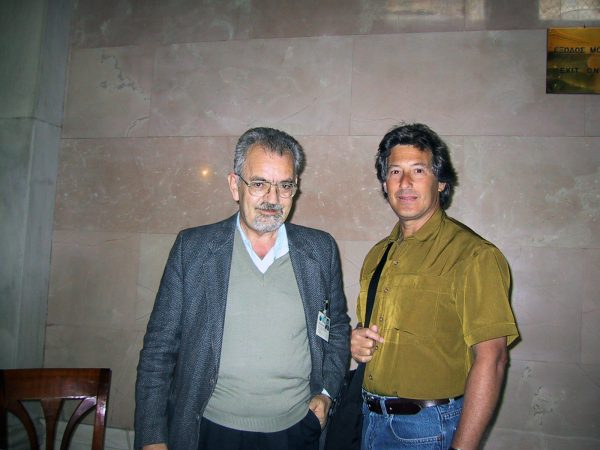 At the National Museum we met Stefanos, a college professor moonlighting as a guide who steered  us through the millenia of Greek history.  Turns out he taught French  for years at Wayne State University in Detroit.  He had some interesting arcane information and a great laid back delivery.

The National Museum houses some of the best treasures from classical periods of Greece, Rome and Egypt. This is not the kind of musuem that throws everything it can find into the halls. Each piece is important and importantly displayed. 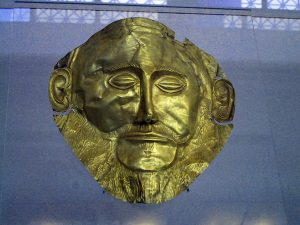 There are rooms of the Cycladic art that inspired Picasso, the 16th century BC golden mask from Mycenae that was once thought to be the death mask of Agamemnon, an amazing bronze statue of Poseidon, the Artemision Jockey, a bronze statue found in a shipwreck off the island of Evia and the 2,000 year old Antikythera mechanism, disovered in a Roman shipwreck off the coast of the small island Antikythera in 1900. This strange interlocking of gears and teeth has since been concluded to be an astronomical computer.

There are statues of Athena and Aphrodite, cases of gold cups and Roman antiquities including one bronze who of Octavius Augustus looking very much like a young Roddy McDowell. There’s also a very good gift shop that sells really good cycladic statue replications. 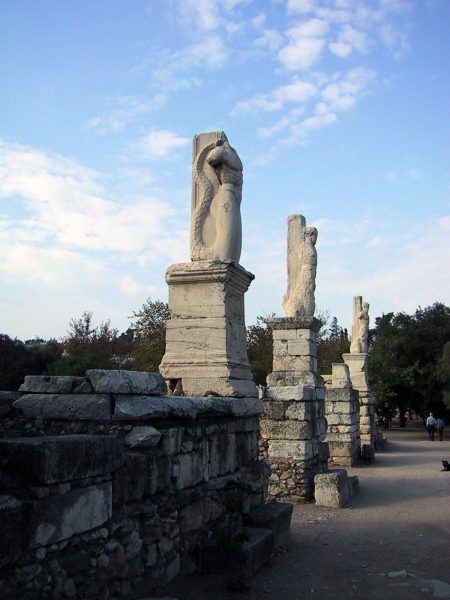 There is a ratty Athenian flea market on the outskirts of the ancient Agora; knoock off clothing, plastic toys and lots of household things. And that’s about all I can say about it. It was good o walk through it and even better to get to the Agora.

The ancient Agora was once the heart of the city, with a direct line of sight to the Parthenon.  This was the city center, home to governement buildings, marketplaces, grand gardens and, of course, more temples. 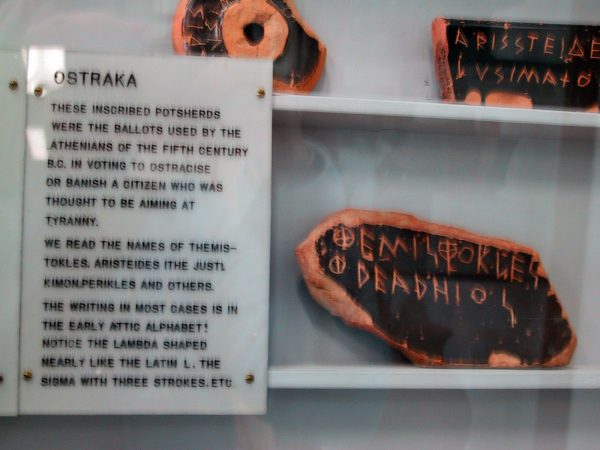 Inside a small museum of the Agora there is a glass case with pottery shards of the “Ostraka”, voting tiles found in the ancient Agora. Citizens used to vote one another into exile, a convenient way to get them out of the city for while. In the same small museum is an ancient child’s potty chair and a 4-thousand year old cookie jar.  No kidding.

The photo the left, are the remains of the Cecrops, the half man half snake who was the first king of Athens.