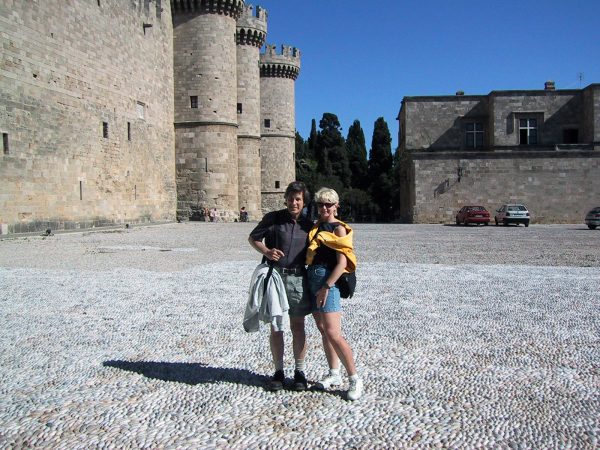 Rhodes or Rhodos is the largest of the Greek Dodecanese islands, lying about 11 miles from the Agean coast of Turkey, which is why there is such a big castle guarding the harbor. There was a lot of battles over the control of this strategic island.

The Colossus of Rhodes, a 100 foot tall bronze statue of the god Helios, was one of the Seven Wonders of the Ancient World. It strattled the harbor. 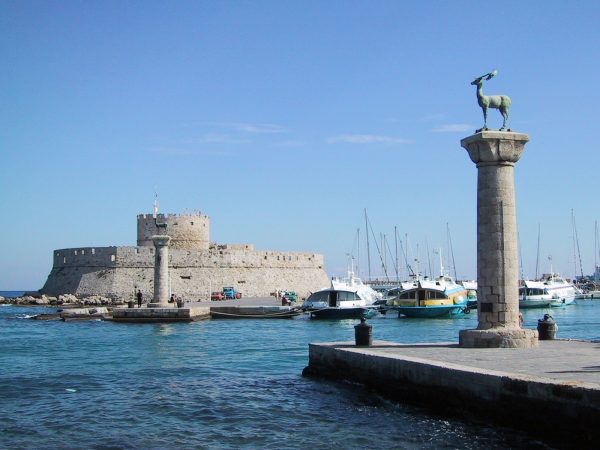 Supposedly ships would sail bewtween it’s legs. In it’s time, it was the tallest monument in the known world.

These days the Colossus is remembered in two columns spanning the entrance to the harbor. Each column represents where one of the legs of the Colossus once stood.

The Colossus stood erect for about 55 years and then came tumbling down in an earthquake in 224 BC, snapping at the knees. There were a few attempts to rebuild it but for the most part it just stayed where it fell for over 800 years until the remains were sold to a traveling salesman from Edessa who transported the pieces back to his home on the backs of 900 camels.

Rhodes is a greener and somewhat European looking island than where we’ve been in the Cyclades.

We are staying at the San Nikolais Hotel, the closest thing to Fawlty Towers we’ve ever been to. Our host, Basil Sotiris has informed us that the Hotel was fully booked with photographers and beautiful models, which was why our pre-booked room was not available.  After a three-act farce which involved a French photographer, two American production assistants and six or seven exotic models, we were finally shown to our room. We’re pretty sure it was the room no one else wanted. Oh well, off to the castle.

Rhodes was once home to Alexander the Great. It served the Roman republic by schooling Noble families. Emperor Tiberius was exiled here in the 1st century. St Paul brought Christianity here. 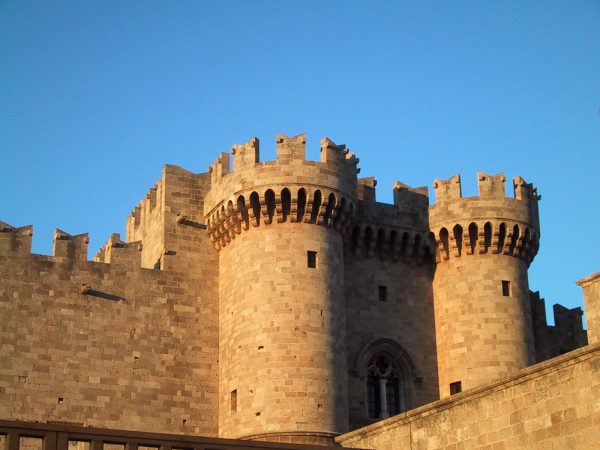 In the early 14th century the island control was given to the Knights Hospitaller, who changed their title to the Knights of Rhodes. It was during this period when the famous Palace of the Grand Master was erected. The thick walls o the Castle held off many Arab onslaughts but finally fell to Suleiman the Magnificent in 1522.

These days the Castle has fallen victim to the Cruise Ship tourists.

The Grand Masters palace is still a remarkable place.  This old fortress has walls within walls and moats within moats.  Amazing that it ever changed hands at all. There are rather moving signs asking the tourist to  remember that not so long ago this was a battlefield, and the blood of many young men stained the grounds and walls.  The Hospital and much of the Grand Masters’ Palace were kitchily restored by Mussollini and the Italian Government. 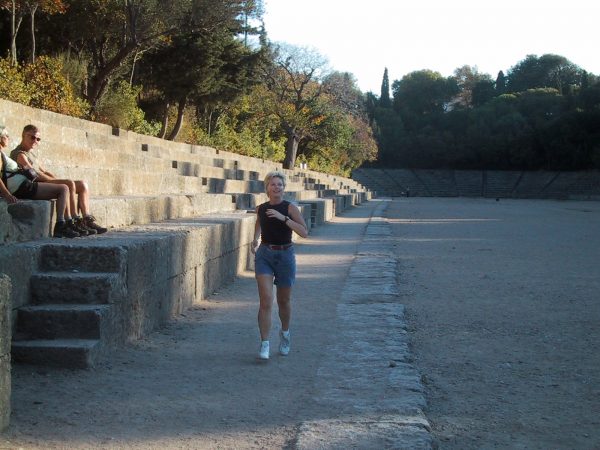 Today we took a walk outside the walls and stormed the Roman agora. We tested the acoustics in a small but perfect Roman theatre; ran at lap at the Stadium and checked out the pathetic Balkan Aquarium with a special exhibit on local octopi (xtopodi). 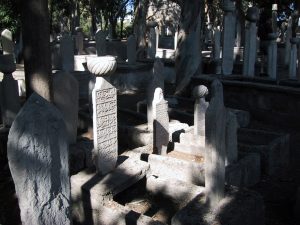 On the way back to the hotel we passed through the old Turkish cemetery, full of marble turbans and swords. When Suleiman the Magnificent conquered the island, and the castle, he created this graveyard for those who had fallen durring the battles. These days the graveyard has become home to stary cats and possibly the ghost of British novelist, Lawrence Durrell, who lived in a house just behind the cemetery in the 1930’s.