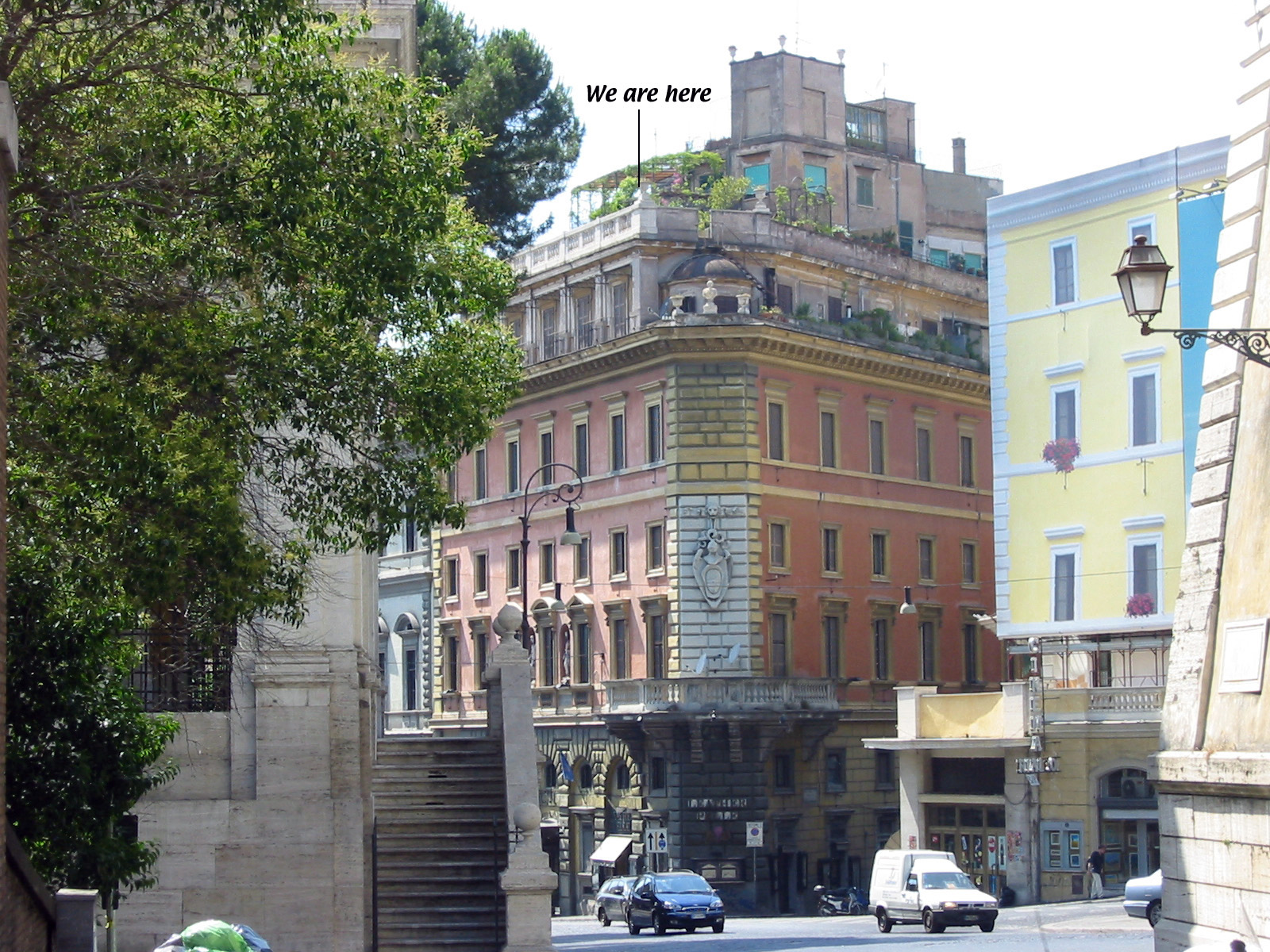 We were running late. The one hour lunch in Lastra A Signa, Tuscany turned into a 4 hour feast. We knew we’d never get away in an hour.

We called the local agent in Rome who had the key to our apartment and told her we’d be a few hours late. She said she’d leave the key for us at the Hotel Traiano lobby. Our Roman apartment is on the top floor of a very old building that also houses the Hotel and we had to enter through the hotel lobby and use the hotel elevator to get up to the top. We easily managed the streets of Rome and dropped off the car at a nearby parking garage on via Urbana in the old Monti district, and returned to the apartment.

It was even hotter in Rome. The temperature was climbing past 35° Celsius, over 100° Fahrenheit. The apartment has a 270° view of the antiquities of Rome. From one side we could see beyond the Coliseum, Trajan’s market and the Imperial Fori over to Piazza Venizia and the Monument to Vittorio Emmanuel II (the typewriter building). From another side over to the Pantheon and St Peter’s Cathedral. The apartment was filled with large glass windows for optimal viewing, which normally would be fabulous, but the sun was so damn hot, it melted the apartment interior. We launched the air conditioners but it still took over 4 hours to cool the place down. The fruits and vegetables of the markets at Campo Dei Fiori were ripening in the hot sun, but it was business as usual as crowds of Romani shopped for their daily groceries. We sat at a café near the statue of Giordano Bruno, who was burned at the stake in the Piazza in 1600 for preaching a religion that mingled Christianity and magic. It was so hot, the bronze statue would have probably put a burned welt into anyone who tried to touch it.

During the morning walk we saw signs for a performance of Candide that night at the Teatro Argentina, and since we both like Candide and we’ve never been to the theatre in Rome, we decided to walk to a nearby music store to buy tickets for that night’s performance. While at the music store, we gravitated to the international section to see what imports from America had come over. Earlier in the Campo Dei Fiori we saw a lot of knockoff CDs including Pink Fraud, Jon Bon Giovi and a tribute to Celine Dion, but the music store had the real stuff. There were CDs of records I haven’t seen since the 1960’s. Does anyone still listen to the Vanilla Fudge? There was even a CD of Danny Kaye’s greatest hits.   By the way, the ticket agency in Italy, similar to Ticketmaster in the US and UK, is called Hello Ticket. I’m just mentioning it because it’s a funny name.

But there was nothing funny about that night’s performance of Candide.

The Teatro Argentina is a fabulous old Baroque theatre with rows upon rows of private ornate boxes circling the auditorium around the orchestra seating below.
We should have realized something when we paid only 20 euro each for tickets in the 5th row center of the orchestra section. Another hint was that there were barely 50 people in the audience as the performance began. The goofy modern dance during the overture was a bit unusual but we paid the money and figured we’d at least stay for the 1st act. The songs and the book were performed in the original English. The actors portraying Candide, Pangloss and Cunegonde were American but the rest of the cast were Italians sounding more like they were auditioning for a Peter Sellers movie. The modern dancers turned from goofy to damn annoying. And then there was the even more annoying chorus. Enough of the stupid masks!!!  This was Candide, not a Greek Tragedy. As the 1st act ended, we walked through the door to the foyer and never looked back. One act was enough.

July 1An interesting Roman story:
Walking along the Lungotevere enjoying a breeze off the river, a car pulled us  over and a man popped his head out of the window and asked “do you speak English?” We said “yes” and walked over to the car. He was looking for directions to the Vatican and as he pulled out his map, we showed him the way. His told us his name was Michel, he was the manager of Pierre Cardin in Paris, and was in Rome for a fashion show. Michel was so grateful to us for giving him directions that he wanted to thank us, and asked us how tall we were. What an amazing coincidence. He just happened to have our exact sizes in a bag next to him on the front seat of the car. “I wish to give these to you because I like you so much” he said, “but please, they are the new models and you must promise me not to sell them to anyone. Now I know you will never forget me.”
I don’t know why I took them. They were really ugly. Maybe I didn’t want to insult him. We were just about to walk on when the punch line finally came. Michel pulled out his credit cards and told us that they wouldn’t work in the stupid Italian banks and now that we were such good friends could we give him 20 euros to help him on his way. We laughed. “Sorry” I said. “We’re on the way to the bank ourselves. We have no money either.” And with that, I tossed the ugly jackets back into the car and we walked away. 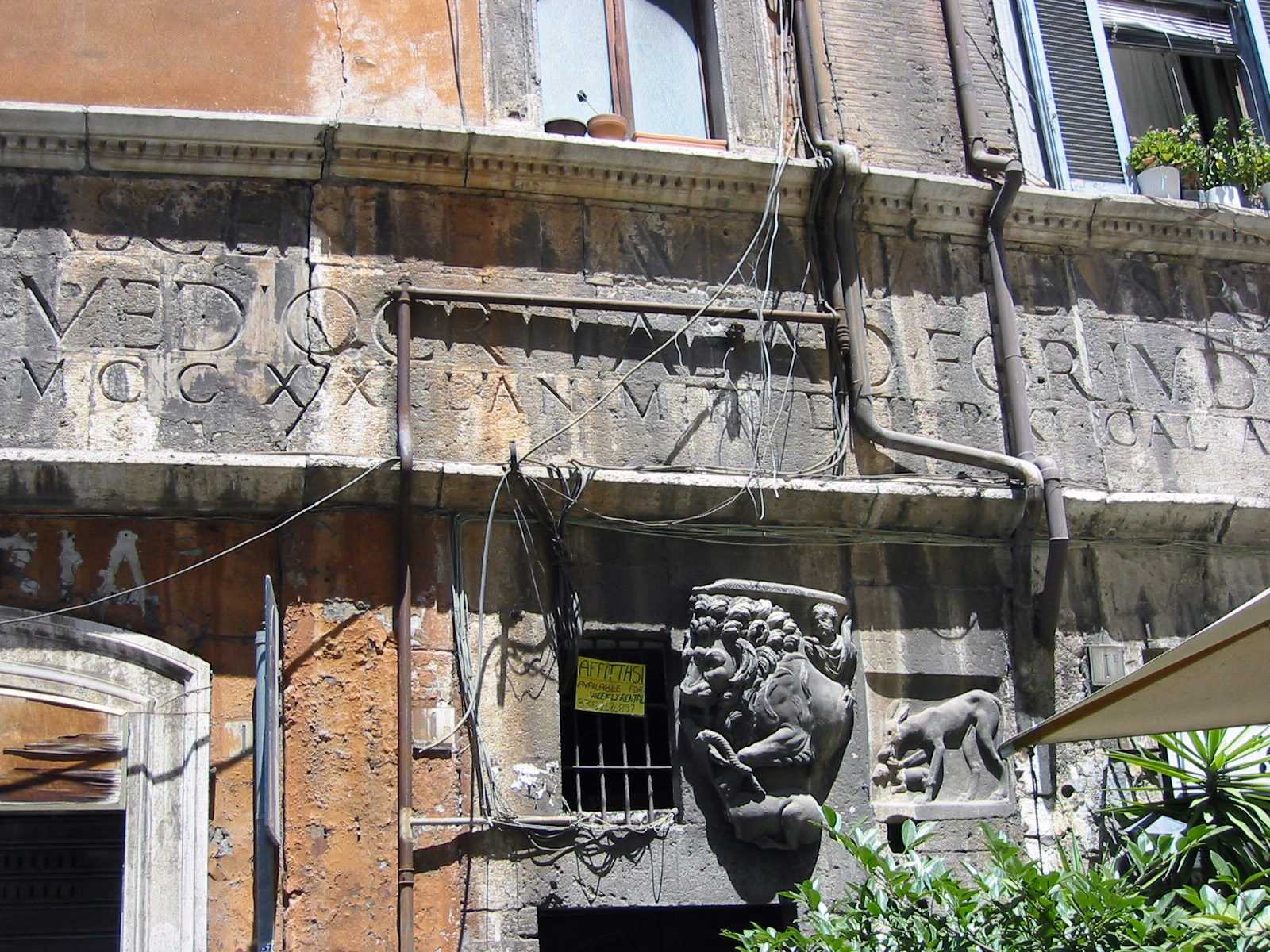 Rome is a city that has been devouring itself for years.
Trajan and Hadrian tore down ancient Roman buildings to build the new Rome. Constantine took materials from old temples to build the first Basilicas. Who knows were Aurelian got the materials to build the wall around Rome, but these materials ended up in the Palazzi all over the city.  You can still see examples of plundered architecture throughout the city in a menagerie of mismatched columns, pedestals and capitols.
Bramante knocked down so much of Medieval Rome that Raphael referred to him as “Ruinante”. Berninni took all of bronze from the coffered ceiling of the Pantheon and used it to make the bizarre Baldichino in St Peter’s cathedral. Parts of the old forum were removed to make way for the silly Monument of Vittorio Emanuel II and then Mussolini removed another wide swath of the Imperial Fori to pave a grand road from his Palazzo Venezia to the Coliseum.These days, the rumbling of large trucks and buses the carbon monoxide fumes of the cars are eating the city. Stone facades are eroding, cracks in monuments are widening and although the restoration and preserving process remains ongoing (half the city is always under scaffold wraps). it’s hard to say how long the city will be able to withstand the onslaught of modernity without reinforcements or new preservation laws against polution and large vehicles rumbling through the central historical zone. 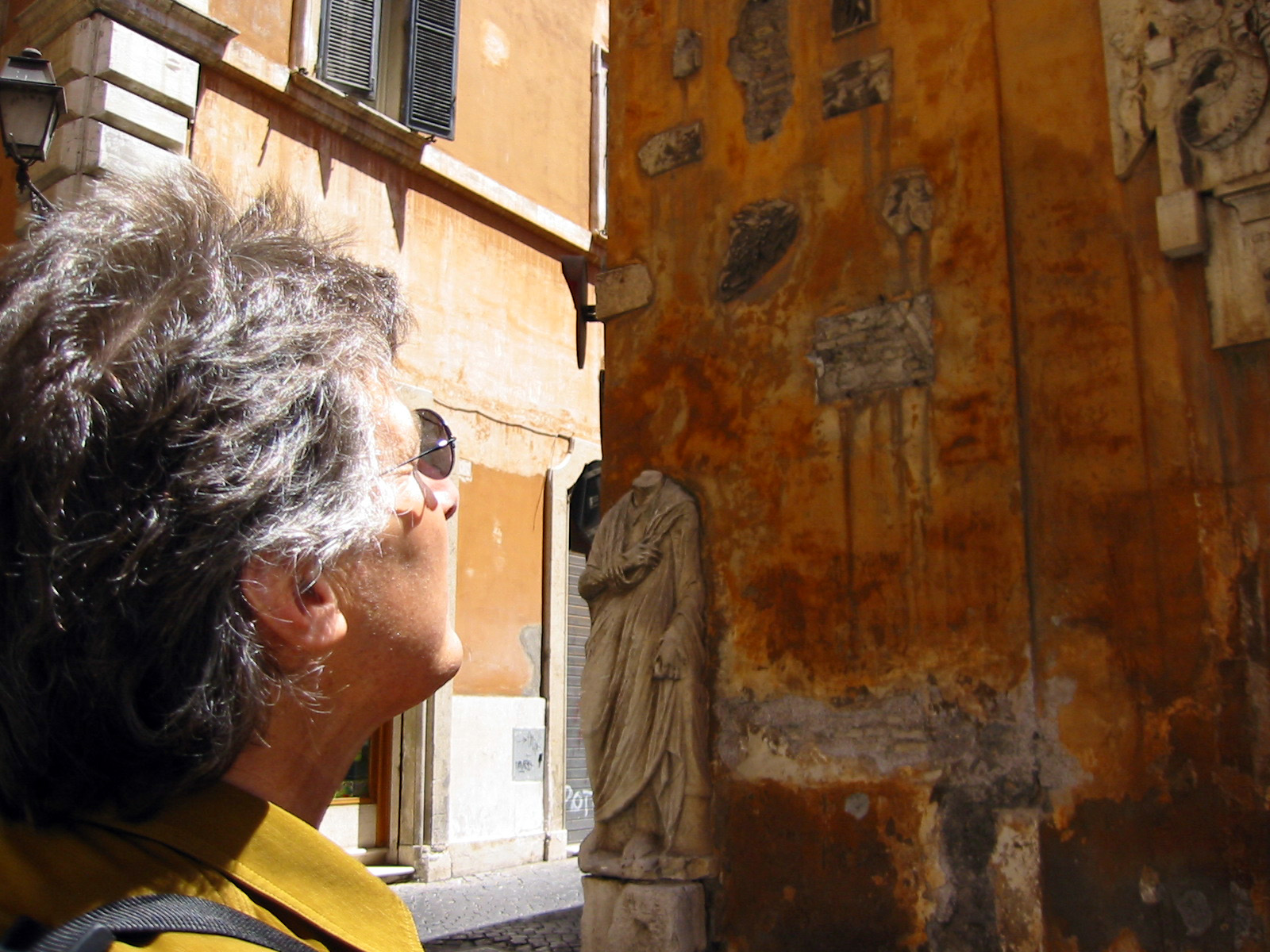 In past visits to Rome, we concentrated more on taking in the monuments and museums, learning about the ancient city, the Popes, the works of Carravagio, Rafaello,  Michaelangelo, Bernini, Borromini and so many more. But this time we were just happy to enjoy Rome as a city. We enjoyed walks down the Via Giulia by moonlight. We walked up the via del Corso, past Canova’s Studio, along the art galleries along via Margutta and onto the Villa Borghese. We joined the regulars for coffee at Caffe San’Eustachio and watched the people in the Piazza della Rotonda (Pantheon). 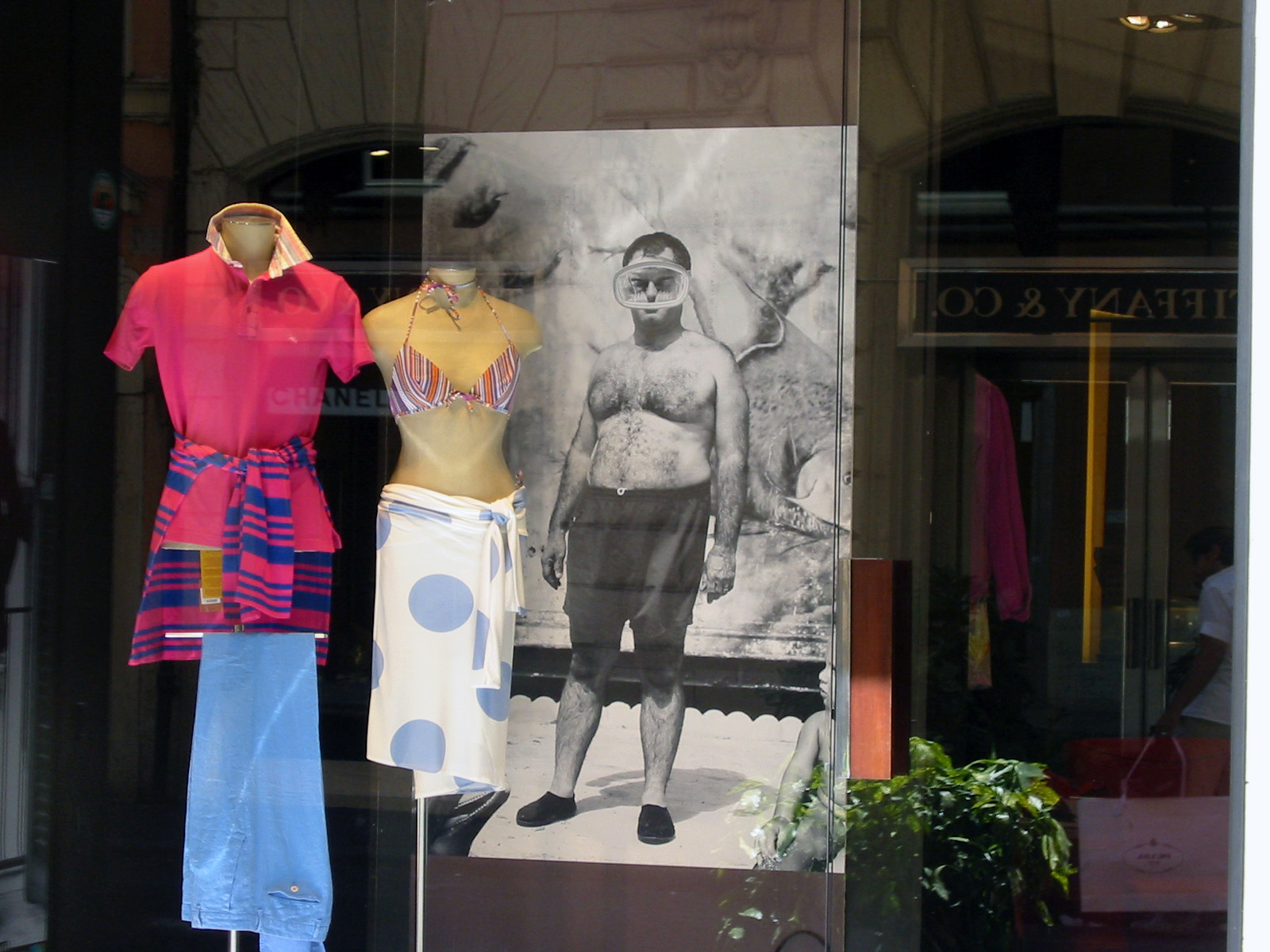 We browsed through the trendy boutique shops along Via del Babuino near the Spanish Steps and Via Governa Vecchia near the Piazza Navona. We and strolled along the Lungotevere. We watched people at the metro stations and thought about how easy it was for Fellini to find bizarre people in Rome. We ate lots of gelato, a great idea especially when the temperature soars past 30°celsius. It was amazing to see the streets so quiet and empty. There were some tourists but for the most part, the Romani decided to stay somewhere cool, probably out of town.

We ate lunch in the old jewish ghetto and delighted in the chocolate ricotta cake from a little kosher bakery on Via Portico Ottavio. And we stopped and spoke with people. We spoke our broken Italian everywhere; to shopkeepers, waiters, people along the street. We even had a nice chat with a gladiator outside of the Coliseum, who was originally a butcher from Montreal. Go figure..

Postscript: In 2012 a friend of Gretchen told her an amazing story that happened to her while she was walking down the Lungotevere. A man asked her directions how to get to the Vatican. She told him it was on the other side of the river. He was so happy, he offerred her a designer piece of clothing…….Yes, the guy is still there, 9 years later. Hey, it’s a job.