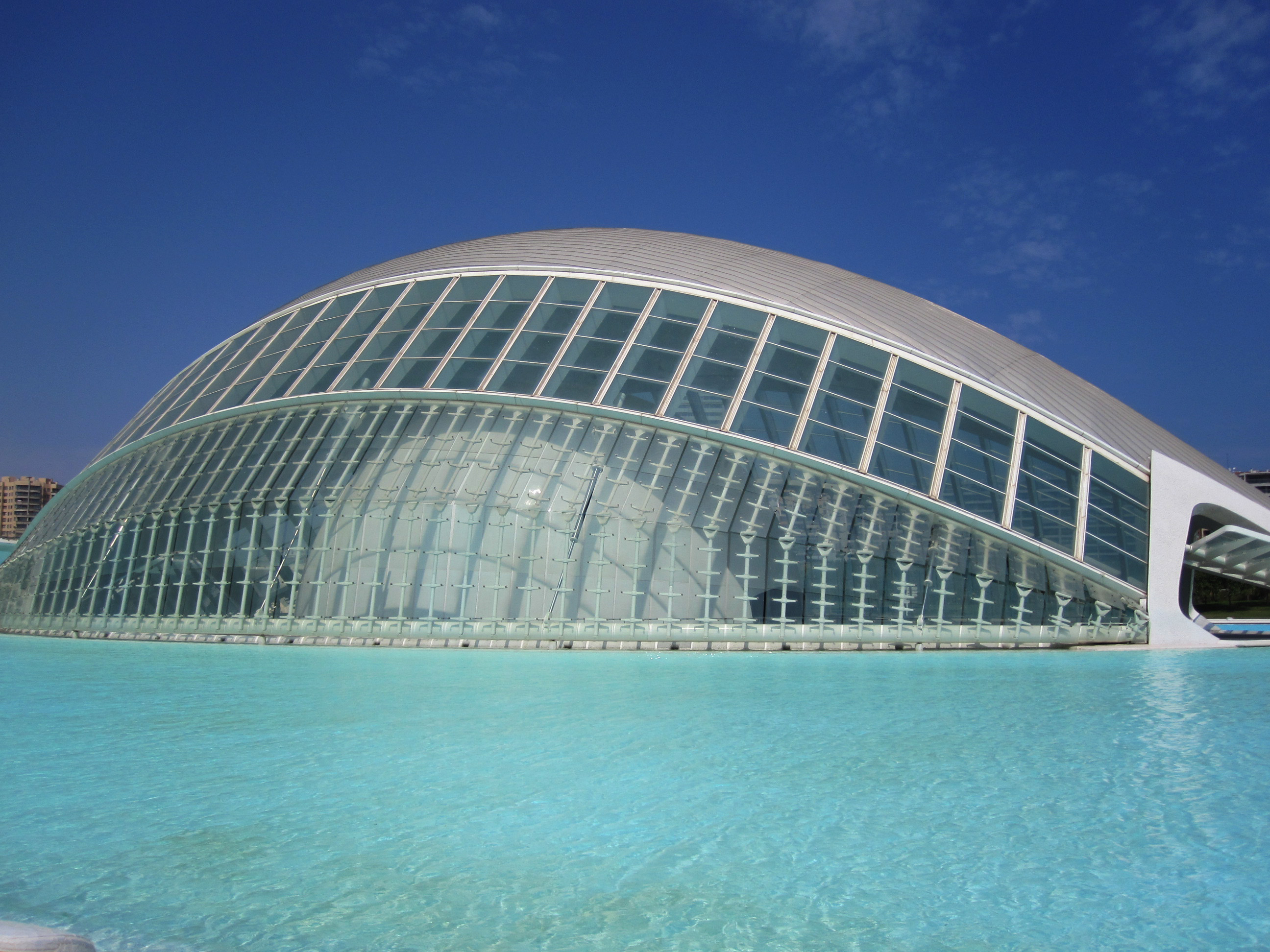 Valencia is the 3rd largest city is Spain; over 800,000 people. It’s got beaches, an old historic city, a very large bull fighting ring, streets filled with high end shopping, a Cathedral that houses the “holy grail” and the amazing City of Arts and Sciences designed by Valencian architect Santiago Calatrava.

The is the city of Horchata and Valencian oranges, paella and other baked rice dishes (arroz horno, arroz negro, arroz a banda. Rice is the main crop in this part of Spain, although oranges are a close second. The city hosted the 2007 America’s Cup sailing competition and built  an enormous marina for all the sailboats. This is one of the most beautiful, livable cities we’ve come across. Great food, good roads, gracious people, no street beggars and clean buildings, no grafitti.

This was once the Moorish city of Balansiya until the Moors were defeated in 1094 by Rodrigo Diaz de Vivar (El Cid) who then became the Governor of the province. An interesting note here, El Cid was basically a mercenary and fought for the money more than principle. He hired out to both Moor and Christians.

El Cid only ruled over Valencia for a short time. He died in 1099 at the age of 59, five years after he took the city. After his death, his wife, Jimena, took over the reign of power for the next three years,but she couldn’t keep Moors out.  Instead of sending troops to protect the city, King Alfonso VI sent soldiers in to burn it to the ground rather than letting the Moors reclaim it. Any memories of the Moors in Valencia went up in the fire. King James I of Navarre reclaimed the city 125 years later and started the rebuilding as a Christian city. 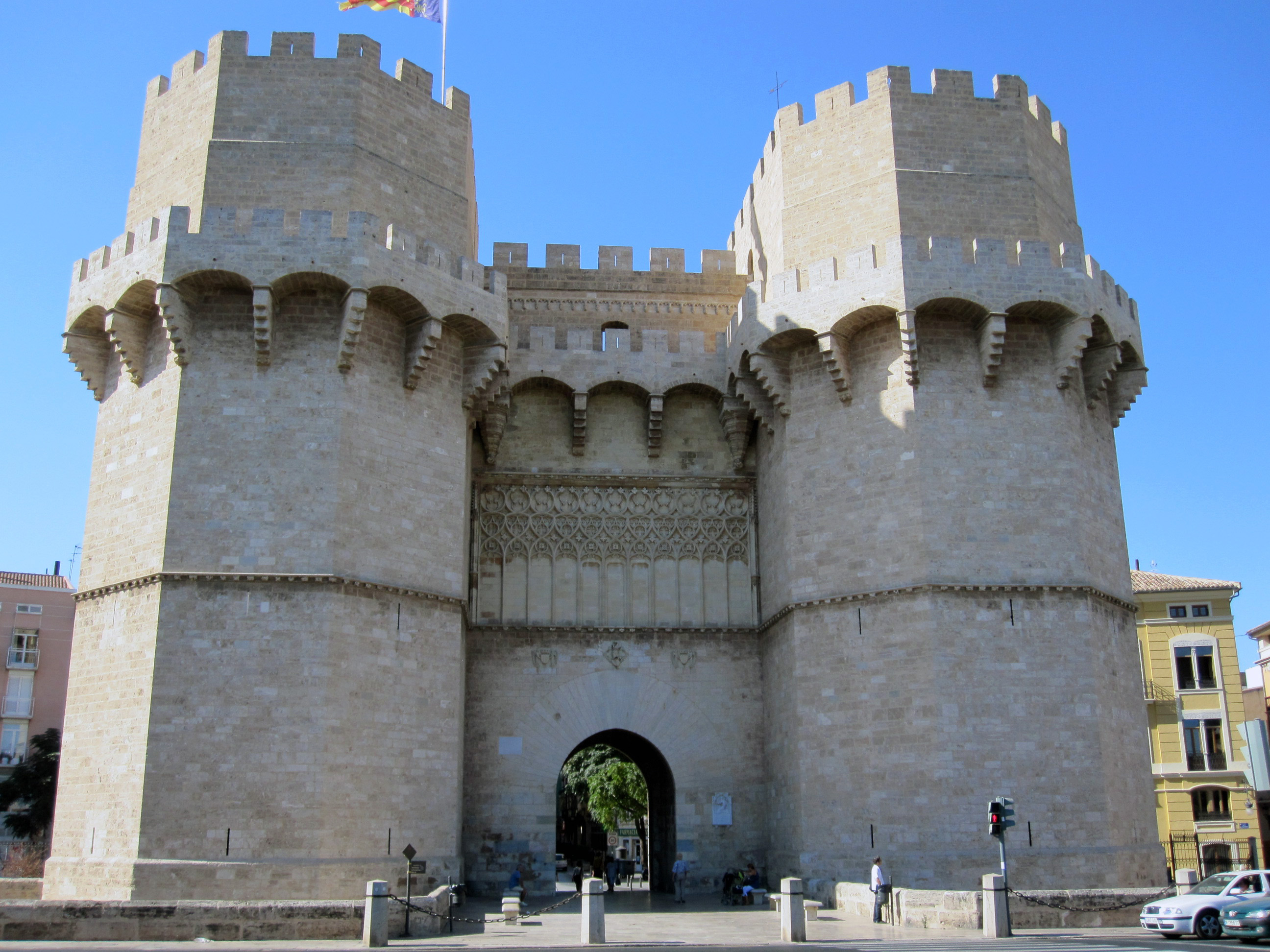 There are a few pieces from the old days of the early Reconquista. The 14th century Serrano Tower Gate is one of the landmarks of the city. It was built as part of the city’s defense but it was mostly used as a trade gate. Valencia was a center for trendy trades such as silk and spices. The Lonja, a 16th century silk market still stands in almost pristine condition. Between 1586 and 1887, the  Serrano towers were used as a prison of the nobility (kind of like the Bastille or the Tower of London) . Maybe this is why The Tower Gate and the Lonja were spared the total urban renewal that claimed the rest of the city. 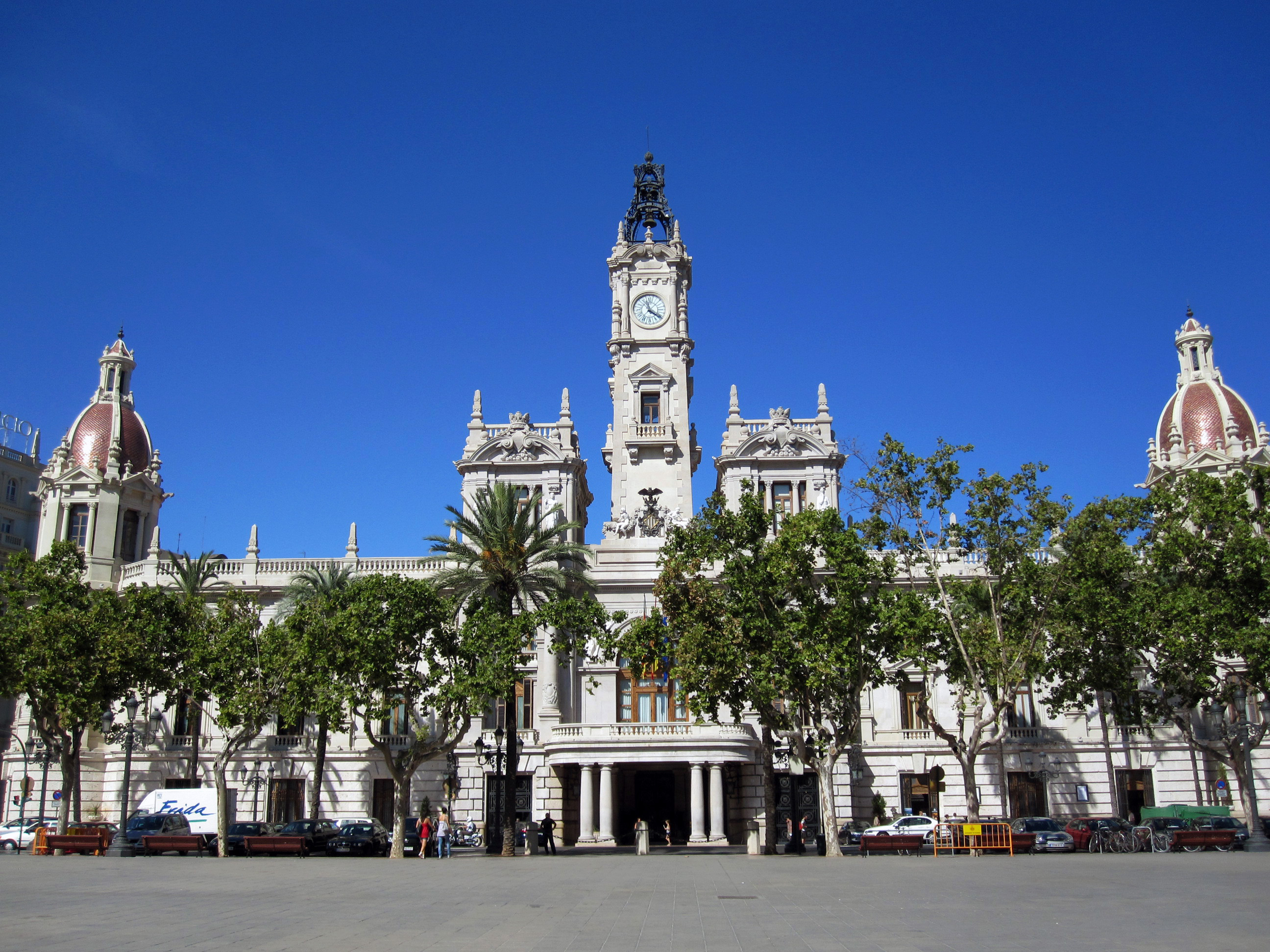 Valencia is a grand city on scale with Madrid and Barcelona. The Plaza de Ayuntamento is the most impressive square in the city and the seat of the local government. 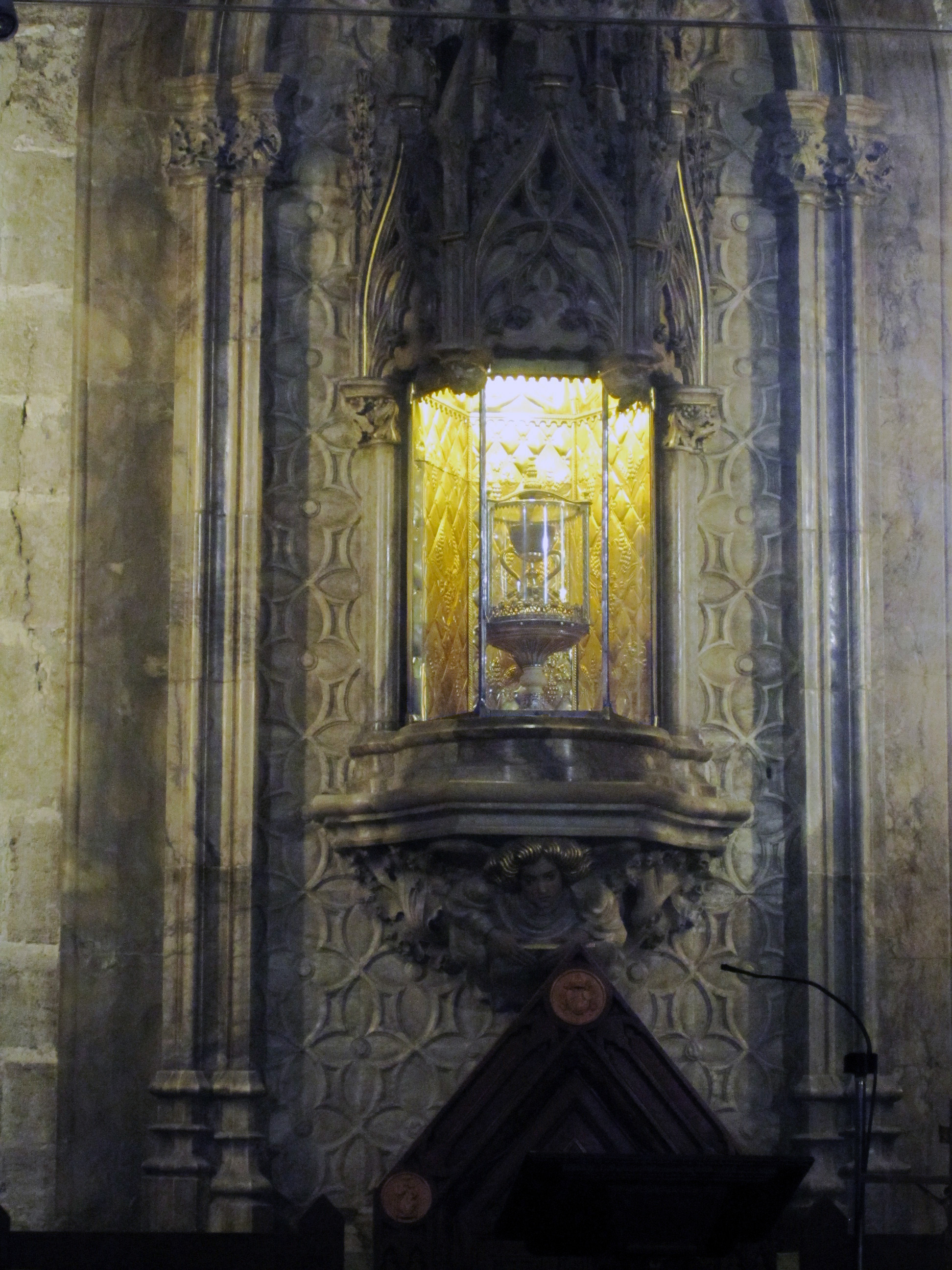 The other remnant of the 15th century is the Cathedral. It was founded on the same site of the old Balansiya Mosque in the 13th century. It’s an odd mix of Gothic and Baroque architecture but it does house a couple of Goya paintings, a beautiful 15th century frescoed ceiling over the main alter.
The Cathedral also boats to have the “holy grail”, the cup used by Jesus Christ at the last supper. OK, there have been may stories about this fabled cup throughout the history of the past 2000 years, and there are many cups that have claimed the honor of being the authentic “chalice”. Although the Vatican does not sponsor the belief that the cup in the Valencia Cathedral is in fact the “holy grail”, it’s here nonetheless. It’s a agate stone cup that has been retrofit into a gold stem adorned with jewels. Whether it’s the real cup or not really doesn’t matter. It still brings in thousands of visitors each year. 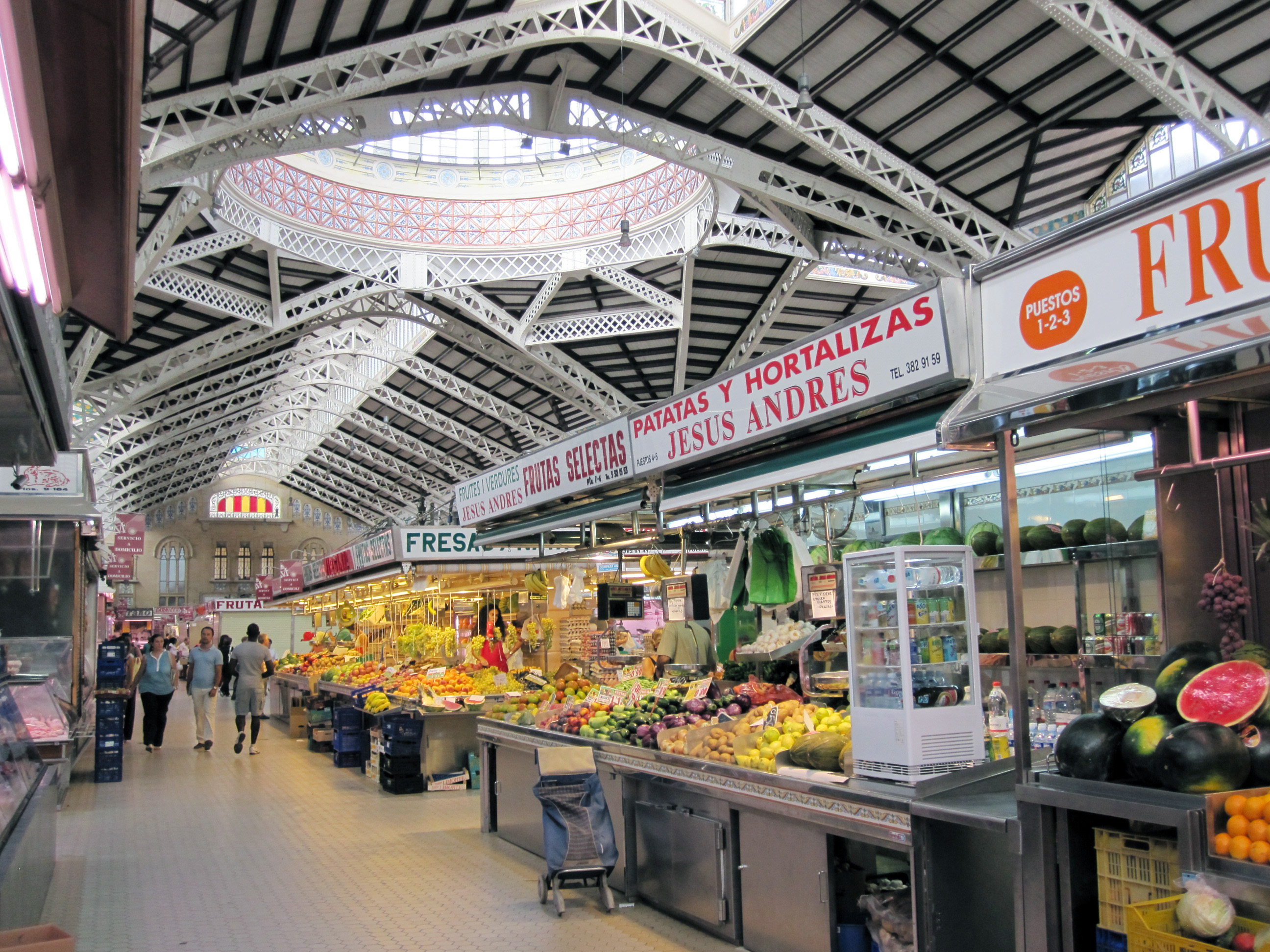 We love the old food halls of Europe and the Mercato of Valencia is indeed a good one and great place to see everyday life in Valencia. This 20th century steel building is filled with fish, meats, sausages, smoked fish, live eels, olives, vegetables, prepared foods and of course orange juice, really good orange juice. 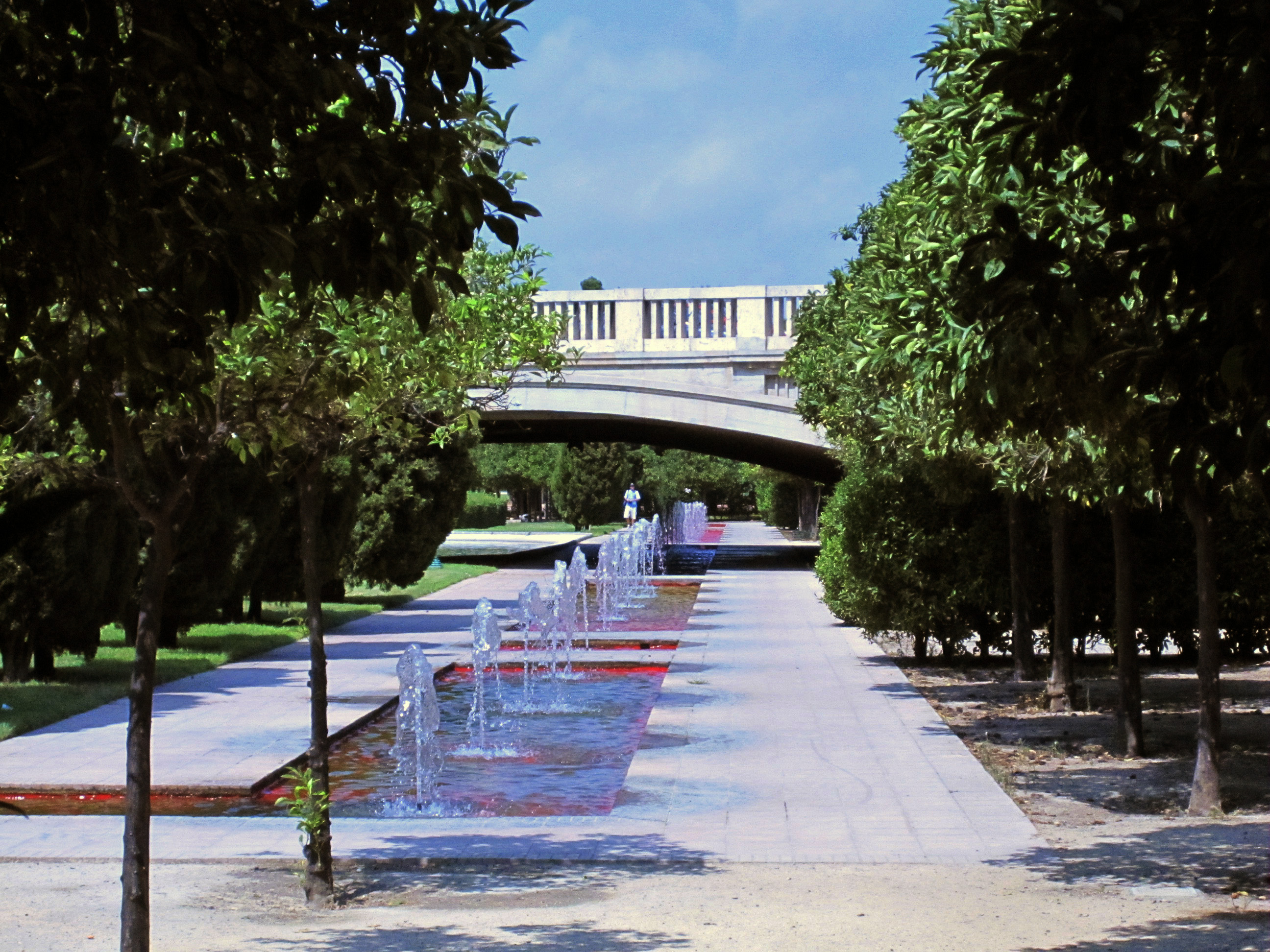 Valencia grew along the banks of the Turia river but the flooding of the river was always pretty devastating to the city. Finally, after a massive flooding in 1957, the city decided to reroute the river and turned 9km of the Turia that once ran through the central city into a park, now called the Jardines de Turia.

The bridges that once traversed over the river flow, now span the Park. It’s a very tranquil walk with an amazing prize at the end, Santiago Calatrava’s “City of Arts and Sciences”; a futuristic complex of buildings that look more like insect exoskeletons on a grand scale. 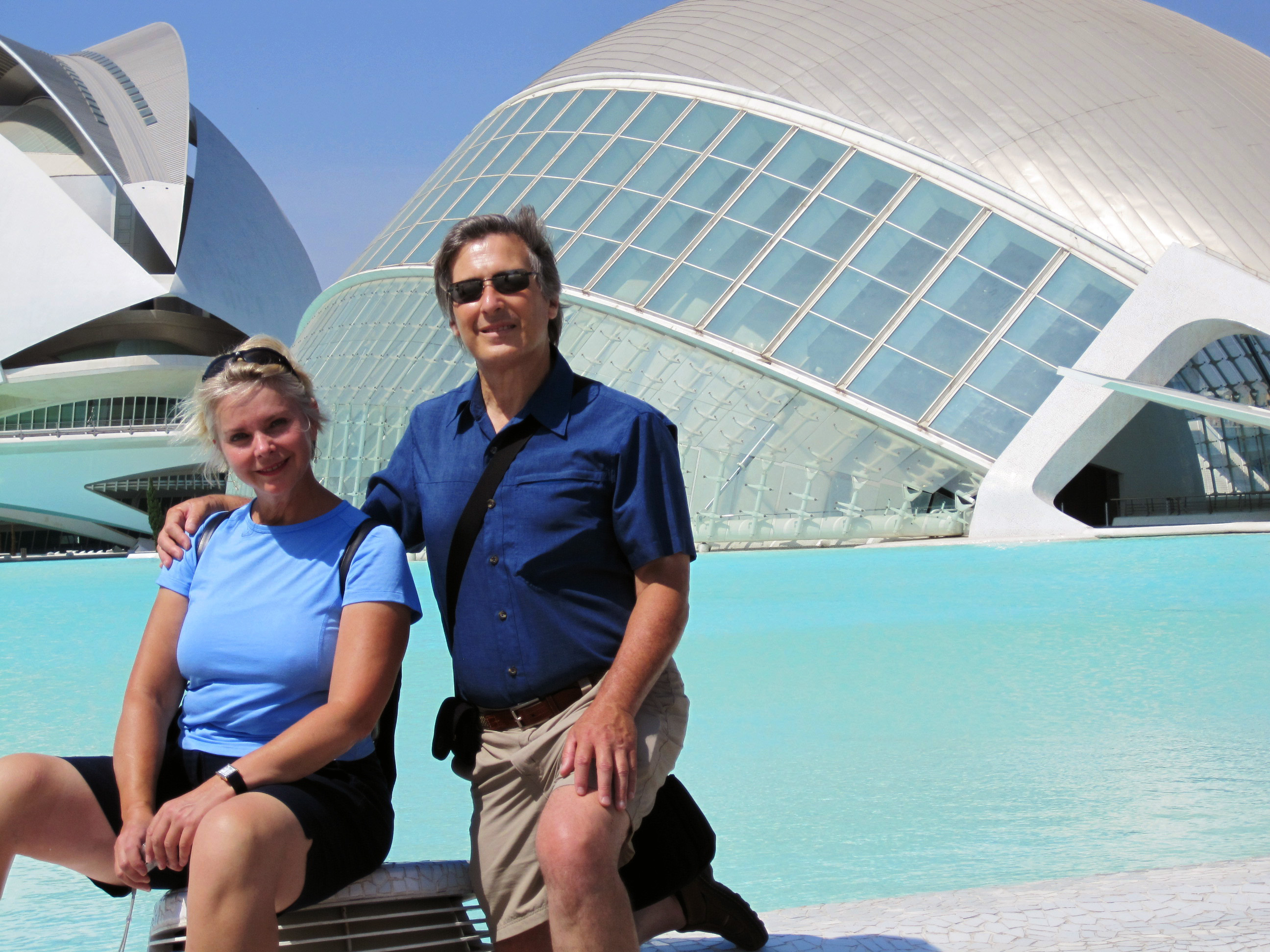 The Palau de les Arts Reina Sofia is the concert hall with 4 auditoriums. The Oceanografic is the largest marine park in Europe. The Hemisferic is an IMAX theatre and the Museo de Ciences Principe Felipe is the Museum of Science; 3 floors of interactive science exhibits.

It’s the largest Exploratorium we’ve ever seen. The first floor is museum shops and a grand congress hall. The second floor was filled with interactive exhibits about you and your body. Gretchen and I both have Greek feet, who knew?. Greek feet have the second toe longer than the big toe. Egyptian feet have the big toe longer than any other toe and the Giselle foot has at least three toes of the same length.

The second floor also had a massive “Superhero” exhibit so you can learn how to be a superhero. This was the kid’s favorite room (of course).

The third floor had a history of drugs from 10,000 BCE to the present. Alcohol has been dated back to 10,000 BCE. Cocaine goes back to 5,000 BCE. Opium came from Sumeria in 4,000 BCE. Cannabis came from China in 2727 BCE (people have been smoking pot for a long time), and tobacco came from the Mayans in 2000 BCE. We also found out that it was NOT Sir Walter Raleigh who brought tobacco to Europe. Raleigh brought the drug to England in 1585 but Jean Nicot brought it to France 25 years earlier in 1560. And yes, nicotine is named after Jean Nicot.

The final space of the City of Arts and Sciences is the Umbracle,  a promenade filled with plants from all over the world under an open air arch.
We definitely didn’t have enough time in Valencia. We saw some great places, eat some good paella, some excellent pulpo alla gallego (Spanish style octopus from Gallego) and horchata made from chufa nuts (brought to Spain by the Moors). Chufa is grown around Valencia exclusively for Horchata. This is not the Mexican style Horchata made from rice. It’s a totally different drink and much much better. We also discovered Iberian reserve jamon is soo much more delicious than jamon Serrano.

Valencia is a great stop.