In 2017, Rome, and all of Italy, suffered the worst drought in 60 years. Rainfall was close to 80% below normal. The water flow to Rome has been continuous, without interruption, for over 2000 years, and yet, the drought of 2017 has changed all that.

Many of the fountains of the larger Piazze still flowed, although the Vatican turned off 100 of them, included the small drinking fountains known as nasone, because of their resemblance to a large Roman nose.

The animal population of Rome relies on the fountains for water, so do the homeless. It’s true that all the fountains weren’t turned off but it was enough to disrupt the day to day life of the city. 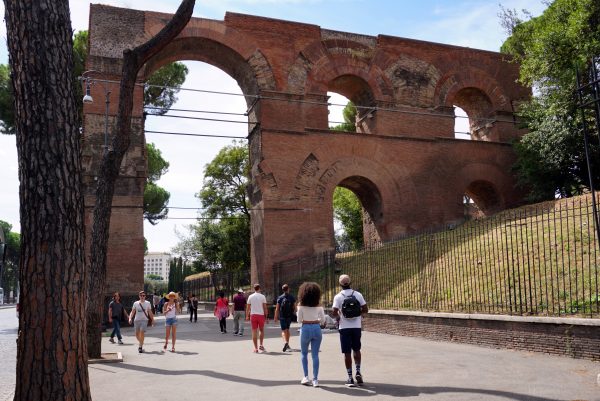 In ancient Rome, water aqueducts carried close to 265 million gallons of water an day into a city population of close to million people. It was the lifeblood of the Roman Empire. Rome’s population these days is close to 2.9 million and these days close to 44% of the water spills out of broken pipes. Lowered water pressure in some parts of the city caused residents on top floors to lug buckets of water to flush toilets.

Aqueducts of ancient Rome were similar to the highway overpasses of modern times. Some of them carried 3 sources of water. Some were incorporated into the city fortification walls.

For visitors to Rome though, water rationing wasn’t that much of a problem. Yes, there were some dry fountains and in some areas, the price of bottled water increased but the rationing never affected the hotels, restaurants, museums or monuments. Rome remained eternally splendid.

Every year, the Soprintendenza Archeologica Belle Arti e Paesaggio per il Comune di Rome (Roman Archeological arm of the City Government) designates new projects for restoration. Of course, this is all based on budgets, which are rare these days. There has been a major outpouring of private funds in the past 5 years and the restorations to the Coliseum, Trevi Fountain, Spanish Steps and Pyramid of Cestius have encouraged others to lend a hand. The monuments of Rome of Italy’s patrimony. No, the are the responsibility of the world and we should protect and restore all of them.

Last year, Telecom Italia Mobile (TIM) gave funding to the restoration of the Mausoleum of Augustus. I have written a lot about this important and forgotten monument of Rome. It is finally getting the attention it deserves and in 2019 the restoration should be completed.

Public art has always been a big part of Rome. The ancients decorated their temples, homes, public buildings and bridges with statues. At the height of the Roman Empire there were as many statues as humans. 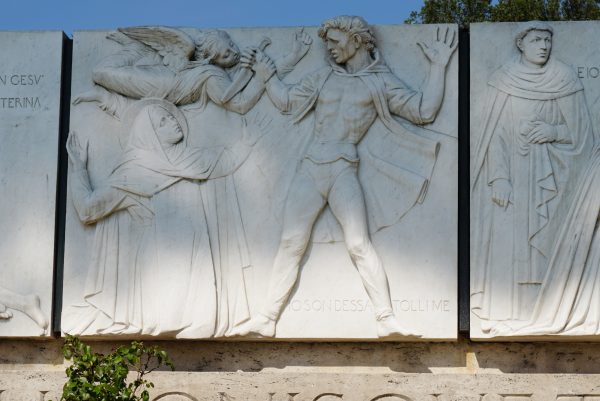 Recognizing the ancient celebrities has become a favorite pastime for us. For instance, here’s a bas-relief of Elvis attacking St Catherine.

In 2016, Italian sculptor and artist, Giuseppe Carta was given a spot in the Piazza del Colosseo for his ‘Germinazione-Pomegranite’. It looks like it will be a permanent addition. 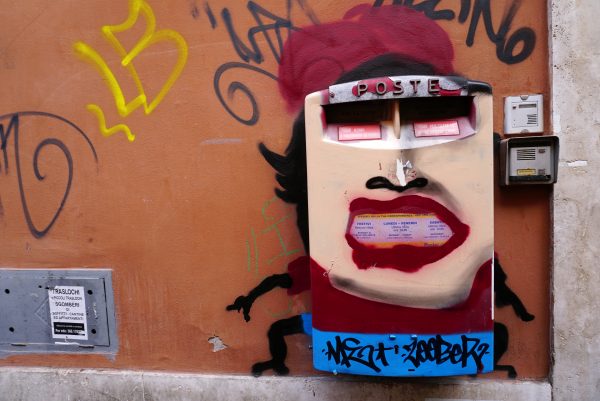 n the Trastevere, a local artist has had some fun with a post box. 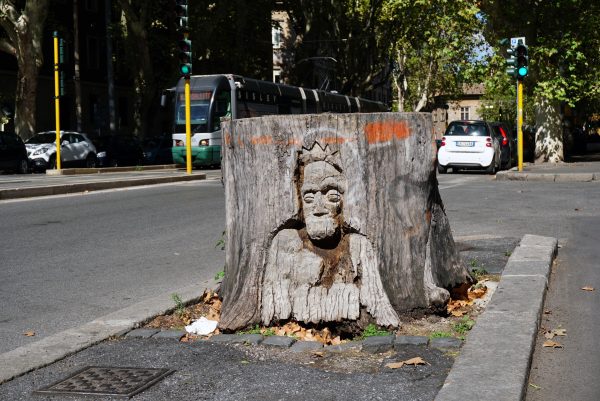 Tree stump art is also becoming popular on the streets of Rome, on both sides of the Tiber River. 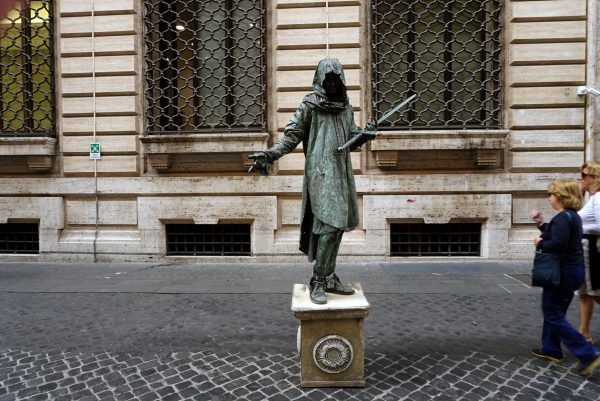 And, although Gladiator impersonators have been discouraged by the Roman police in the past few years, there are still some good examples of performance art. Just don’t look for them near the Coliseum or on the via dei Fori Imperiali. 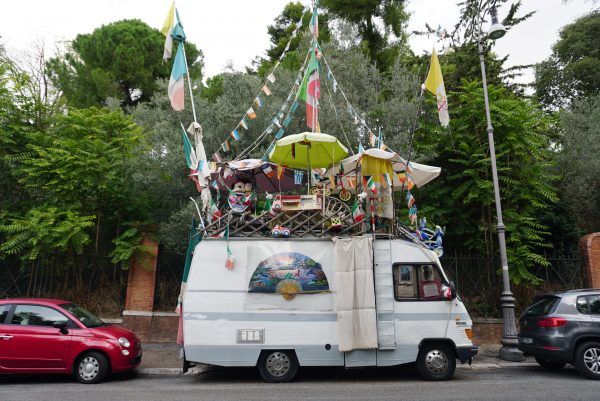 Of course, all art doesn’t not have to be perceived as beautiful. This van has been parked near the Piazza di Porta Capena. This was the ancient start of the Appian Way but I don’t think the traveling van has any relation to the Appian Way. 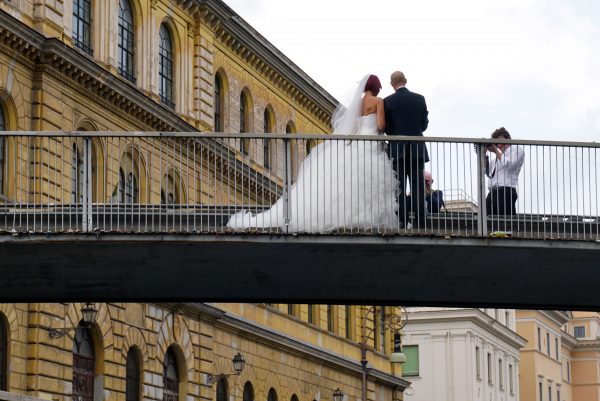 Marriages in Rome are always popular in September and newly wedded couples always get their photos taken in front of the Coliseum, always from this little pedestrian bridge that crosses over the via degli Annibaldi, connecting the Largo Gaetano Agnesi to the via della Polveriera that leads up to the Basilica of San Pietro in Vincoli. Our flat looks down on the little bridge and onto the Coliseum. It’s a great location but we do spend a lot of time cleaning up discarded beer bottles and garbage left behind by tourists.

The Mayor, Virginia Raggi, won the election on the platform to clean the garbage from the streets. Rome has always had a garbage problem and in recent years the city was looking grim.

After a few official resignations and fights with the garbage companies at the beginning of her term, things calmed down and there has been an effort to provide more trash cans and more trash can pick ups.

So how is Rome getting rid of all it’s garbage? The city sends it to Austria. That’s right, every day 3 trains filled with 700 tons of Roman garbage head to the Zwentendorf recycling plant east of Vienna. The plant incinerates and converts it into hot flue gas, which generates steam, which is converted into electricity providing power to happy Austrians.

In order to provide more power to Austria,trash hoops with plastic liners have been distributed to all tourist zones in Rome. Now, if Rome can only get the residents and tourists to use them. Come on people, the plastic liner is 3 feet away from where you just dropped that water bottle! 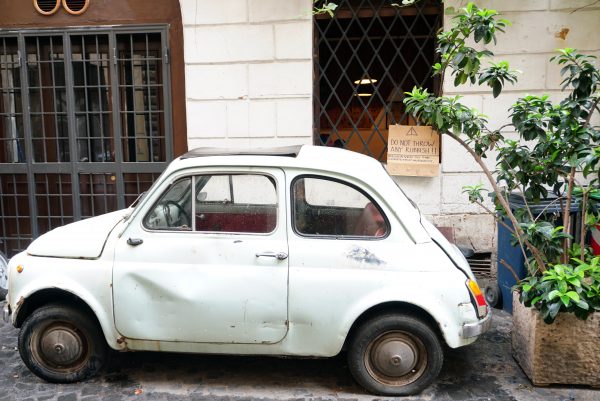 Local shops are waging their own battle against refuse disposal. The started with signs in Italian until they realized most of the tourists were not Italian speakers. They have since resorted to somewhat confusing requests for consideration.

September is our favorite time of the year in Rome. the crowds of the summer are gone and the Romans have returned refreshed from the August ‘Ferie’ holiday.

Our favorite restaurants are open and it’s easy to get a reservation. The lines at our favorite lunch places are also very manageable.

September starts in the heat of the summer. Normal temperatures are in the high 80’s or low 90s (Fahrenheit). 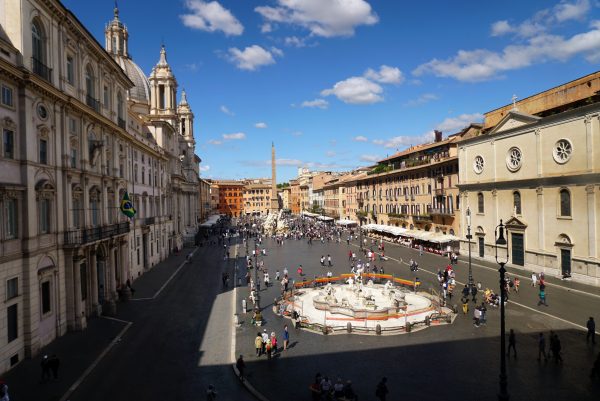 However, by mid month the days cool off a bit and the air becomes very clean and crisp, wispy clouds over a bright blue sky.

September is a great month for Roman walks. 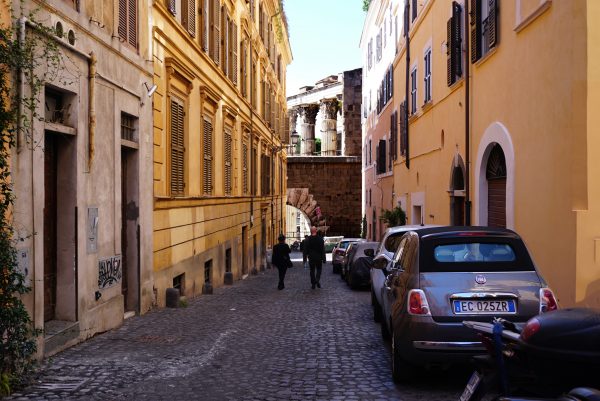 Every street is a reminder of the ancient wonder of this amazing city. 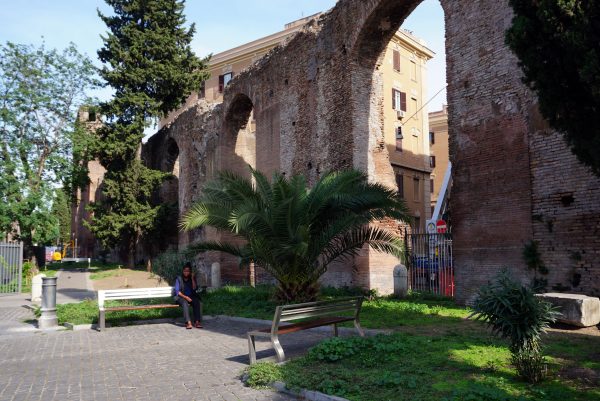 The aqueducts might no longer bring water into the city but they still provide a beautiful backdrop for neighborhood parks. 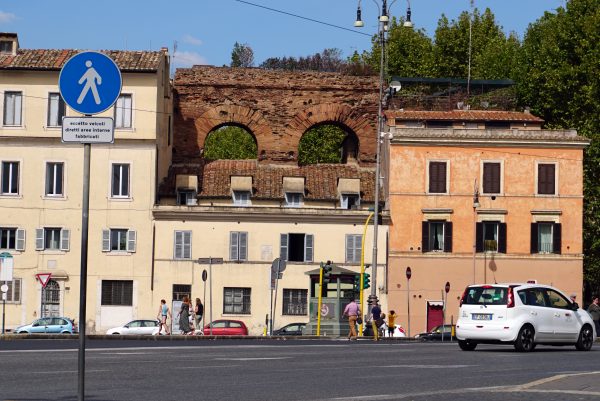 Every street corner recollects a place where people have lived for over 2500 years. 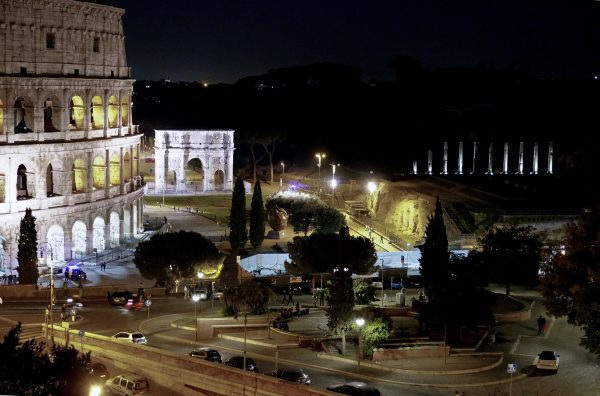 Day and night, Rome is the eternal city. 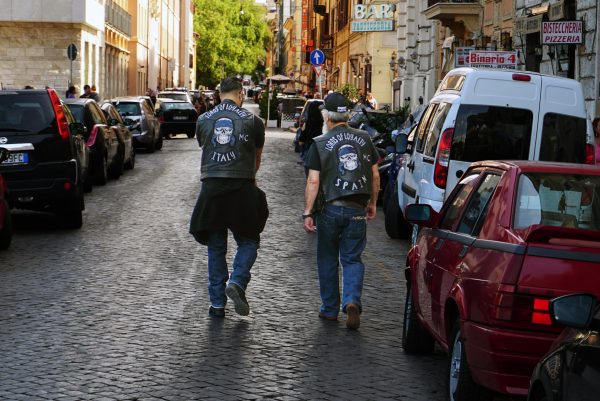 This has been a meeting place of the tribes since 753 BC. It still is.

Thank you all for your support of romeonrome.com. It’s been so much fun writing this site. I hope you’ll enjoy this city as much as we do. 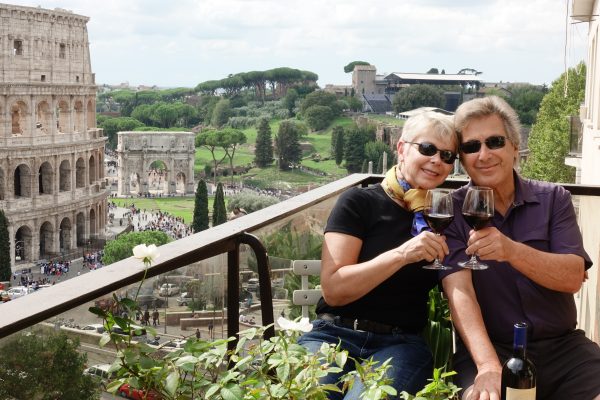