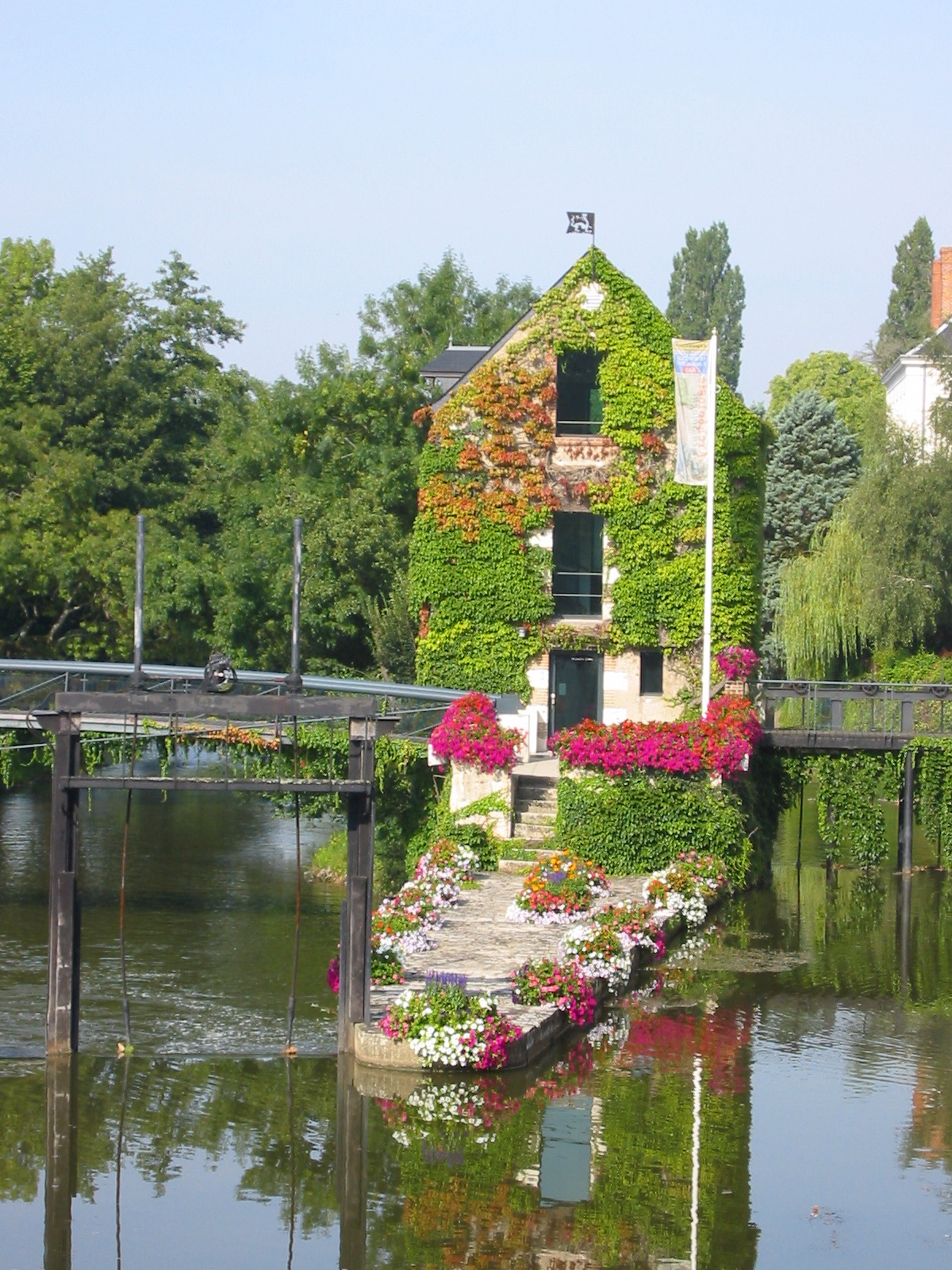 Romorantin-Lathenay is so perfectly located; forests abounding with game, rivers convenient for trade, but due to circumstances beyond its control, while other villes dotted their grounds with magnificent Chateaux, Romoratin was left behind.

As a kid, King Francois I used to play in the nearby forest and streams of Romorantin and when he decided to build a grand chateau in the Loire Valley, he had Leonardo Da Vinci draw up the plans. But in 1518, the area was devastated by the plague. So much for the big plans.

Some years later, Francois regained the urge to build, but this time he moved the location of his Chateau to Chambord. And what a chateau it is. However, it’s not in Romorantin-Lathenay. It’s about 35 kilometers north in a beautiful park close to the Loire River.

Romorantin sank back into a relaxed medieval existence until a Matra-Renault factory sprung up and brought in the autoworkers and their families. What’s weird about it all is that the autoworkers of France have a hard edge to them, much different than the charming gentrified folk of the Loire. One could go as far to say they kind of look like thugs. Romoratin has become Thuggyville. It looks like central casting for a French gangster movie.

Our morning ritual each day would start with a walk around the corner to the nearby bar and have les grand tasses de café while the local autoworkers would drink their beers, read the racing sheets and place their bets at the PMU window (their version of OTB). They are scarred and tattooed with enormous deformed noses from bar fights and alcohol.  There was the thug Elvis impersonator, another with a walrus moustache that rivaled David Crosby at the peak of his walrusness. And then there were those who looked like 18th century Pirates. They had voices that sounded either like 1950’s carnival barkers or just bad French cartoon characters.  It was the best people watching we experienced in a really long time.

We’d finish our coffee at one bar and take a stroll across the town center to another and sure enough, the same thugs have made it over. They seem to cross over between 2 to 3 bars, all day long, every day, even Sunday morning. The bars would open at 9am and the thugs would be waiting. Maybe they worked a night shift? Maybe they didn’t work. France has a really great welfare structure. 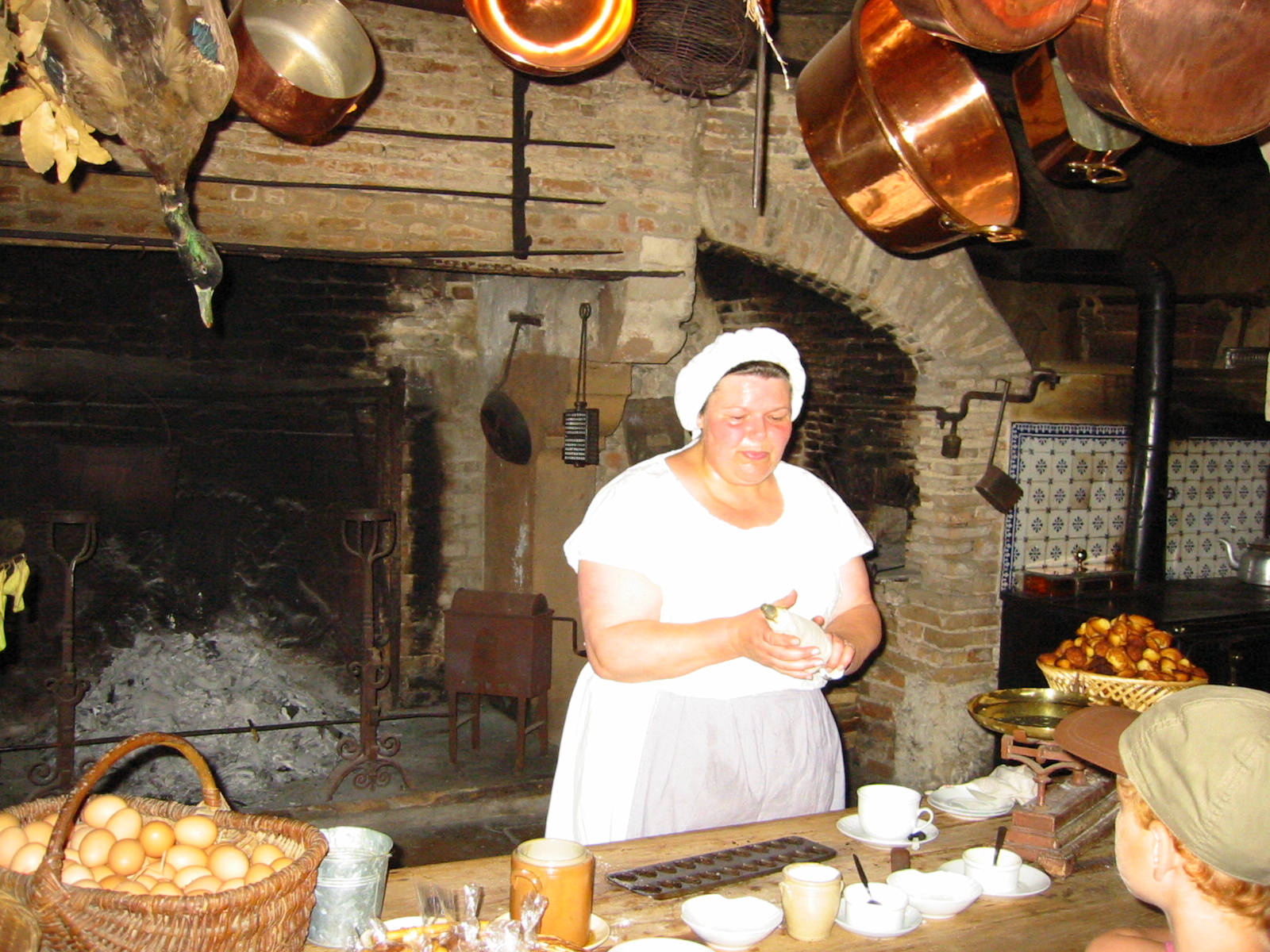 We didn’t come to Romorantin for the thug watching, even though it was a big plus. We came for the luxury, comfort and great cuisine of the Hotel  Lion D’or. Oh sure, we’d share our morning coffee with the locals, but at night we’d introduce our epicurean curiosities to langostines cooked in special medieval spices, milk fed veal, courgettes flowers stuffed with crabmeat and duck confit.

We had a few good walks around the town and a quick visit to an old Chateau where we were set on by a gang of really pissed off geese and we watched a woman in a traditional kitchen costume made madeleines in the Chateau kitchen.

We’d always planned to rent a couple of bicycles and tour some of the Chateaux in the area. Afterall, there were at least 5 of them within a 40 km radius. The terrain was flat, there wasn’t much traffic, and after a long airplane ride we sure could use the exercise.  Even though I haven’t really been on a bicycle much for the last 20 years, for the first few kilometers, zipping around the roundpoints, swerving around the traffic, we felt like Lance Armstrong taking a few warm-ups rounds through the first stages of the Tour de France. However, that feeling didn’t last all that long. The 65 kilometer round trip tour was definitely a bit too ambitious.

The blistering +90° heat off the black tar, the strain of our heads propped up onto the back of our necks for all those hours, the pain on our butts that still hurts when I sit down too quickly, the cramps in my thighs, and if that wasn’t enough, apparently all the cafes and bars along the way closed early that day, or were already closed for the August holiday. Our two small bottles of water went all too quickly and the Bounty candybars melted after the first hour in the sun. 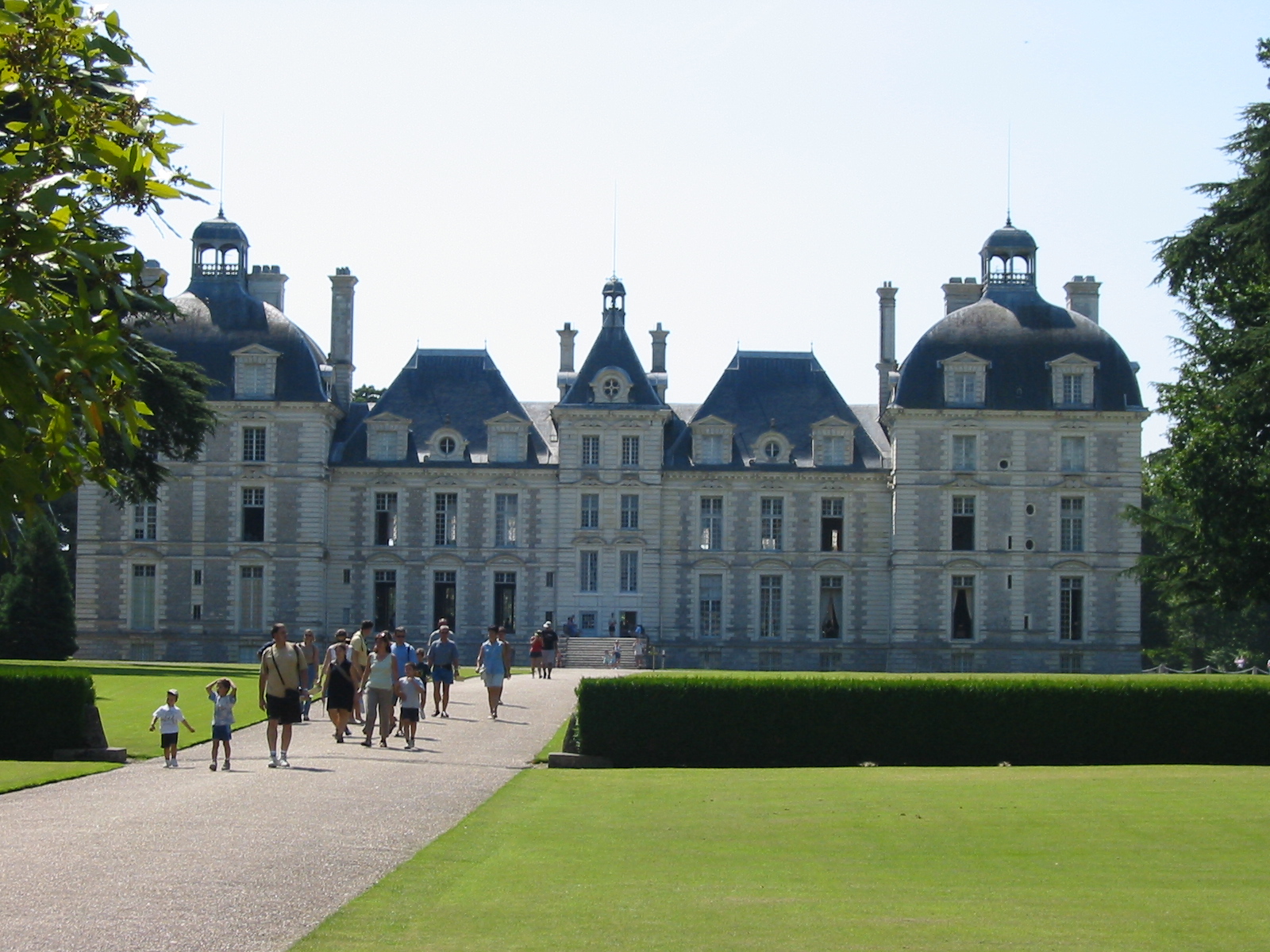 It was a tough ride, but after 33 km, we arrived at the Chateau de Cheverny, parked the bikes and had a great walk about tour. The Hurault family has owned this castel since the early 17th century. It was taken away from them after the French Revolution but they managed to get it back. It opened to the public these days but they still keep some 75 dogs on property for a few hunts each year. The trophy room of Stag horns is astounding.

I even felt pretty good when we got back on the saddles and proceeded west down the D933 towards the Chateau de Moulin, but about 5km later I had to stop. All the pains came back like a raw nerve ending. A stop for a few minutes and another 5km. Another stop another 7km until we arrived to the Chateau de Moulin. 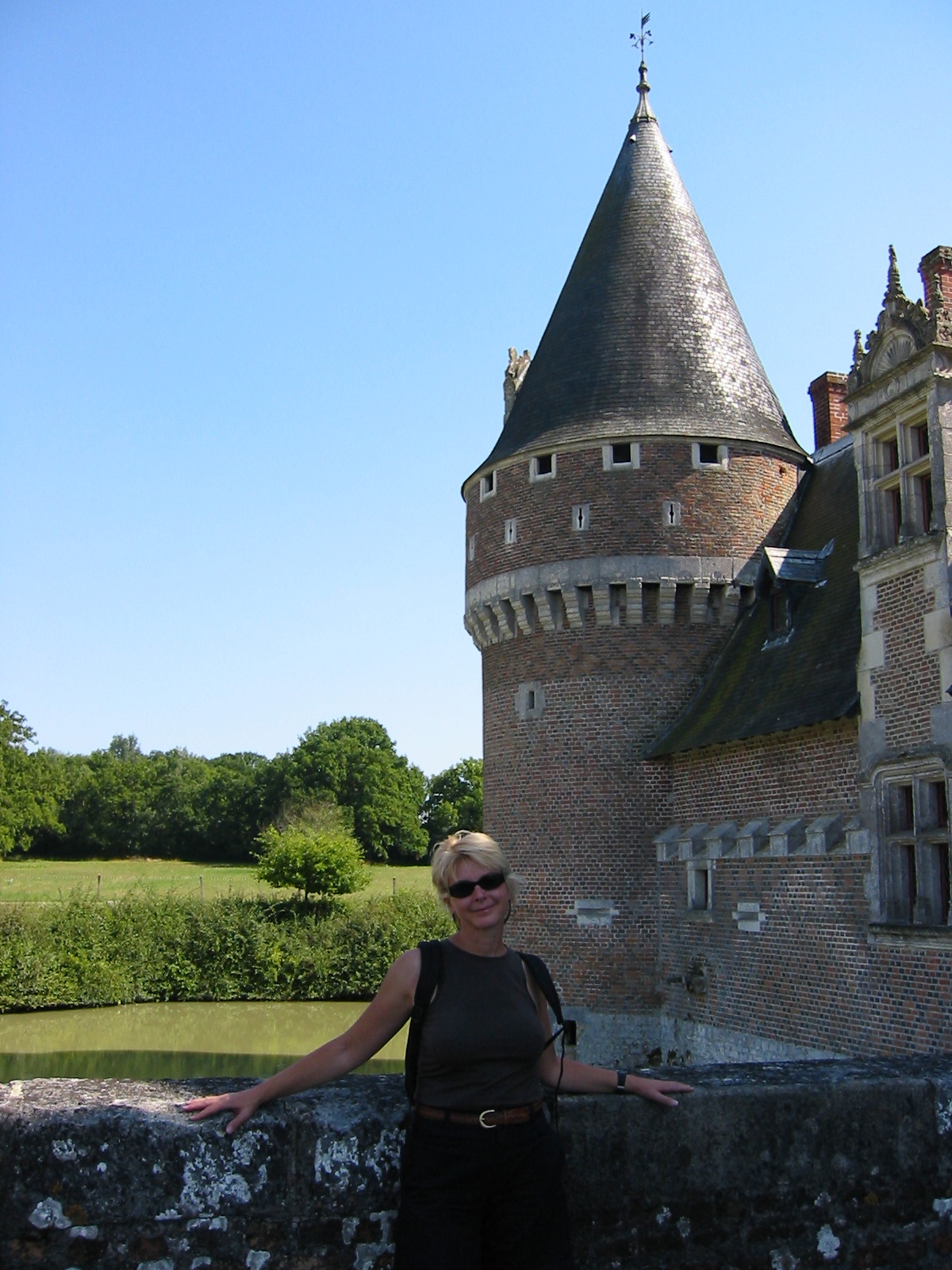 For some stupid reason we paid 6 euro to see the outside of the outside of the Chateau de Moulin. Yes, the ticket was for the exterior only. The interior ticket was another 8 euro each and the tour didn’t start for another 45 minutes. Maybe it was the exhaustion, maybe it was the heat. We walked to the ticket window, paid 6 euro each, walked out and looked and the same view of the Chateau we’d already seen before we paid the 12 euro. And since we didn’t want to wait around for another 45 minutes to pay another 8 euro to see the inside of the Chateau, we got back on the bikes and headed back to Thuggyville. At this point, we were only 10 km from home. 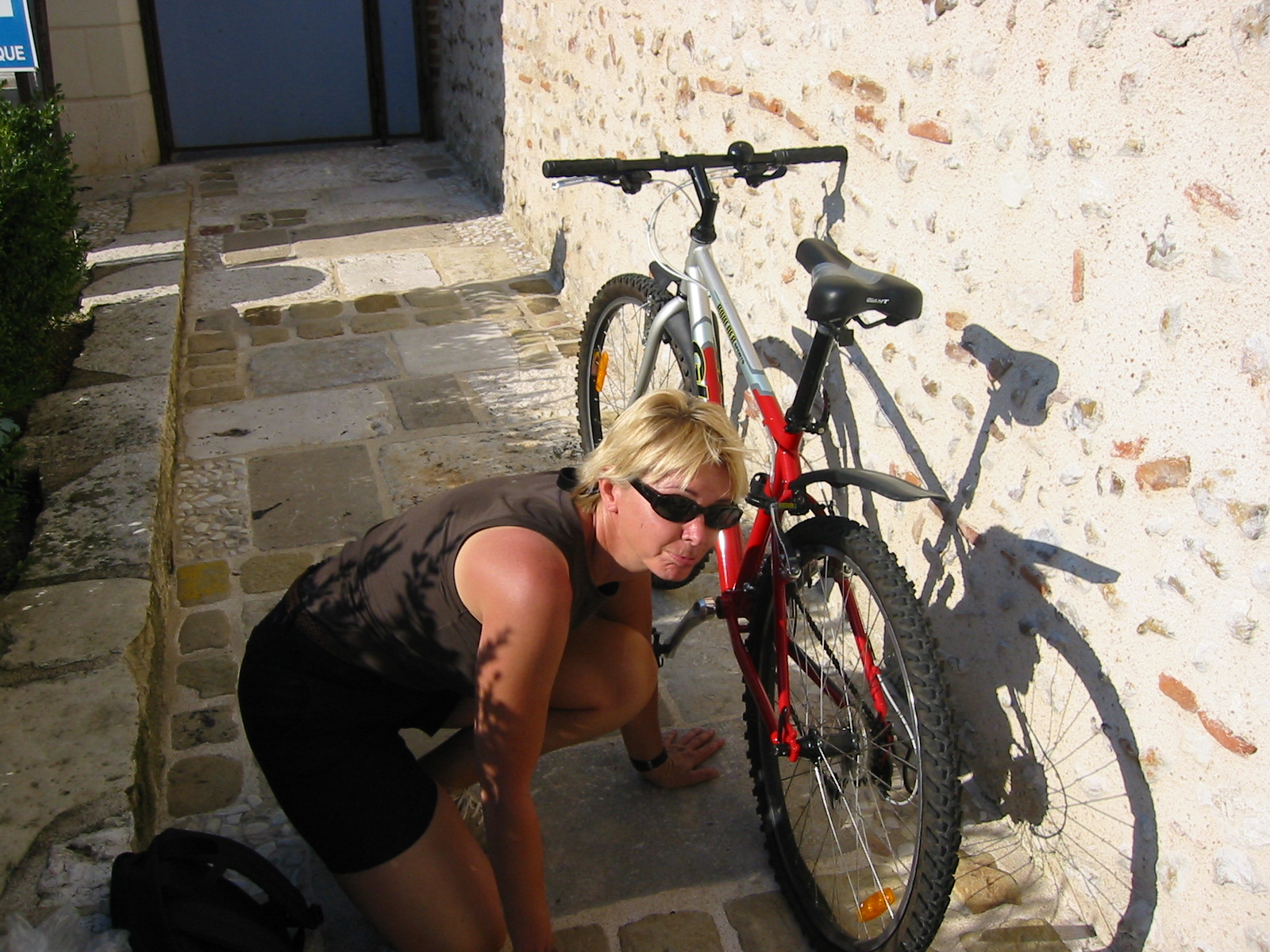 About 4 kilometers from the hotel, Gretchen’s rear tire went flat. And that was that.  We pumped up the tire a few times, but the air never lasted very long and of course, we didn’t have a tire repair kit. We walked the last 4 kilometers. They were slow and hot and we were incredibly thirsty.

And as we climbed the streets of the old industrial neighborhoods, good fortune smiled on us with an open Bar. I can’t remember the last time I downed a cold Perrier that quickly. As I moaned in our bed that night, I realized it was one of those experiences that might have been hard while doing it, but once having done, it felt really good.

Post Script: In 2003, the Matra-Renault plant shut down. The bars are now either really full or very empty.